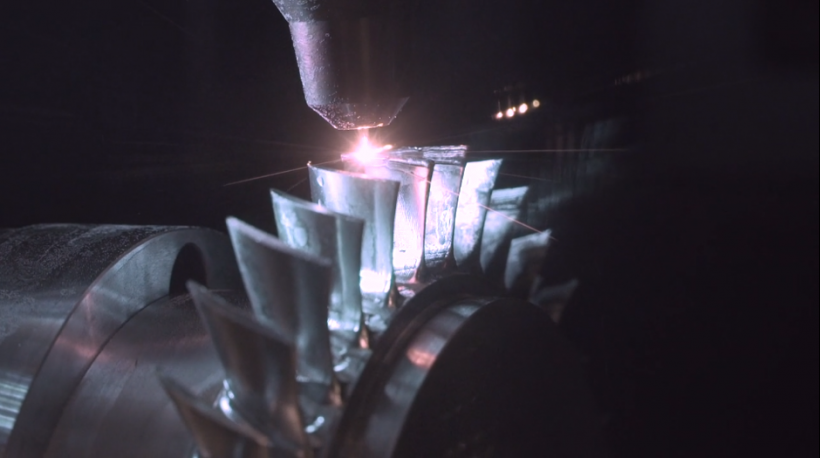 Wire Arc Additive Manufacturing (WAAM) is one of the lesser-known metal 3D printing technologies, but one that holds huge potential for large-scale 3D printing applications across multiple industries.

This guide will focus on how WAAM works, its benefits and limitations, as well as key WAAM companies and successful applications.

WAAM is a variation of a Direct Energy Deposition technology and uses an arc welding process to 3D print metal parts.

Unlike the more common metal powder AM processes, WAAM works by melting metal wire using an electric arc as the heat source.

The process is controlled by a robotic arm and the shape is built upon a substrate material (a base plate) that the part can be cut from once finished.

The wire, when melted, is extruded in the form of beads on the substrate. As the beads stick together, they create a layer of metal material. The process is then repeated, layer by layer until the metal part is completed.

You can see the process in action here:

WAAM can work with a wide range of metals, provided they are in wire form. This list includes stainless steel, nickel-based alloys, titanium alloys and aluminium alloys. Any metal that can be welded can also be used with WAAM.

Unlike PBF AM machines, which have a limited build envelope, the robotic arm of a WAAM machine has more freedom of movement, meaning that the size of a component isn’t limited by space, but only by the distance the robotic arm can reach. This allows for the production of larger parts, which wouldn’t be possible with PBF processes.

In terms of material costs, the welding wire used in the WAAM printing process is significantly less expensive than the metal powder used in metal PBF.

This is because WAAM technology is based on welding, a well-established manufacturing technology in and of itself. WAAM hardware usually includes off-the-shelf welding equipment, which is less expensive than many metal 3D printers available on the market.

Additionally, wire is typically easier to handle than powder, which requires specialised protective equipment to use.

Parts produced with WAAM are particularly notable for their high density and strong mechanical properties, which are comparable to parts manufactured with traditional manufacturing methods.

As the wire feedstock is a 100 per cent dense input material, there is negligible porosity induced in the fabrication process, leading to a very dense final part.

WAAM is also a good option for repair and maintenance operations for specific components like turbine blades, as well as also moulds and dies.

Worn-out features or damaged parts can be repaired with WAAM by depositing new material on its surface. This can result in significant cost savings as it eliminates the need to produce a new part from scratch.

The Limitations of WAAM

One challenge associated with WAAM is heat management.

The printing process involves high temperatures, causing the build-up of residual stress – a problem commonly faced with metal 3D printing. As residual stress can often lead to deformations in a component, cooling must be factored into the process.

When using certain materials, like titanium, shielding is necessary to create an inert atmosphere to ensure the right building conditions.

This means that the process has to take place in an inert gas chamber. However, the inert gas chamber limits the size of parts that can be produced with this technology and installing such a chamber will increase the cost of the equipment.

WAAM typically produces near-net-shape parts with a poor surface finish. The surface of a part therefore needs to be finished via machining.

As of 2020, the WAAM market remains small, with a handful of companies actively developing this metal 3D printing technology.

WAAM3D is perhaps one of the lesser-known names in the field but the company has conducted an extensive amount of research before bringing its technology to market.

WAAM3D was founded in 2018 to commercialise Cranfield University’s intellectual property in the field of WAAM.

According to the company, the lack of supply chain – namely software tools, WAAM-designed hardware, raw materials, training and services – has hindered the deserved industrial adoption of WAAM processes, despite its proven business benefits.

The company aims to create such a supply chain and promote the use of WAAM across the aerospace & defence, oil & gas, energy and nuclear industries.

So far, WAAM3D has published several successful applications of its technology.

Another titanium part, a 1 m long pressure vessel, has been manufactured for Thales Alenia Space. By using WAAM to manufacture this component, the team saved more than 200 kg of material per item, and was able to consolidate two parts of the vessel into one.

Additionally, the production of the part reportedly took several days – a significant reduction in lead time, since the part usually takes several months to produce.

Earlier this year, WAAM3D completed its first, Series A funding round which is set to bring the company further to commercialising WAAM technology.

Cranfield University inspired the foundation of another company: AML3D. AML3D’s Managing Director, Andrew Sales, studied at Cranfield and, fascinated by the technology’s potential, founded a WAAM service bureau in Australia in 2014.

In 2019, the company secured certification from global shipping industry accreditation body, Lloyd’s Register. With the certification in place, AML3D delivered its first part to a marine customer: a set of martensitic stainless steel wear rings.


The parts are traditionally forged and require an additional heat treatment post-processing step. This process increases the total lead time up to six to eight weeks. Such long lead time items must be held in a physical inventory or replaced prematurely.

By using WAAM, AML3D was able to manufacture the rings for the same cost, while reducing the lead time to just a few days. This is a critical improvement for ships that stay in the dock for a limited time.

To further grow its capability, the company is now planning to launch a production facility in Singapore in the near term. This is driven by demand from the Singapore marine hub, as the location is a strategic hub for commercial shipping routes.

In a similar vein, the Port of Rotterdam’s Additive Manufacturing Fieldlab (RAMLAB) is using WAAM to speed up the production of marine parts. The company made a splash in 2017 by 3D printing a full-scale prototype of the world’s first class approved ship’s propeller.

The “WAAMpeller” uses 298 layers of nickel aluminium bronze alloy and weighs 400 kg. The part was completed in seven months — demonstrating the potential of WAAM to optimise the production of future vessel components.

In 2018, Ramlab, in collaboration with Huisman Equipment, started another project to 3D print a large offshore crane hook, weighing close to 1000 kg. Huisman Equipment took this project even further and 3D-printed, certified and installed a 36,000 kg WAAM hook, designed specifically for use in offshore lifting operations.

One of the first applications that opened WAAM technology to the world was a 3D-printed steel bridge, developed by Dutch start-up, MX3D.

The bridge project, which started in 2018, took more than a year to complete but served as a showcase of the potential of large-scale metal 3D printing.


More recently, the MX3D team used its technology to 3D print an aluminium bike frame. The futuristic-looking frame was designed with the help of generative design software and 3D printed in two parts under 24 hours, showcasing the high printing speed of MX3D’s WAAM technology. MX3D also developed a ‘smart fixture set-up’, which would reportedly allow any custom WAAM frame to be prepared easily for riding.

Another player on the WAAM arena is German company, Gefertec. In 2017, it unveiled its 3DMP® manufacturing technology, which is part of Gefertec’s GTarc AM machine series.

The largest system features a 3-axis system for the production of parts up to 3 m3 with a maximum mass of 3000 kg.

What’s interesting about Gefertec’s machines is that they can be integrated with a milling system. This means there is the possibility of creating a hybrid system, where 3DMP® technology is used to create a part, which is then immediately finished with machining.

One example of using Gefertec’s technology involves 3D printing a metal wheel-set bearing cover for a locomotive. This model of the locomotive was put into service in the 1960s and 1970s, meaning that it can be difficult to procure spare parts, which are often no longer available.

As a result, delivery of the component would traditionally take up to nine months, and during this time the locomotive would be out of service, leading to high costs.

Gefertec’s 3D printer was used to produce this spare part, and the project, from the initial design to reverse engineering and production, was completed within two months. While this was the first-time production of a work-piece, with an established process in place it’s possible to lower the lead time even further, potentially to just a few weeks.

With relatively new technology like WAAM, it takes time for applications to develop and the benefits to be felt throughout the industry. However, we see the demand for large metal 3D-printed components growing, suggesting that the adoption of WAAM will accelerate.

Ultimately, it’s clear that WAAM is transforming the way large metal parts are produced, giving companies the option of a faster and more cost-effective production method.