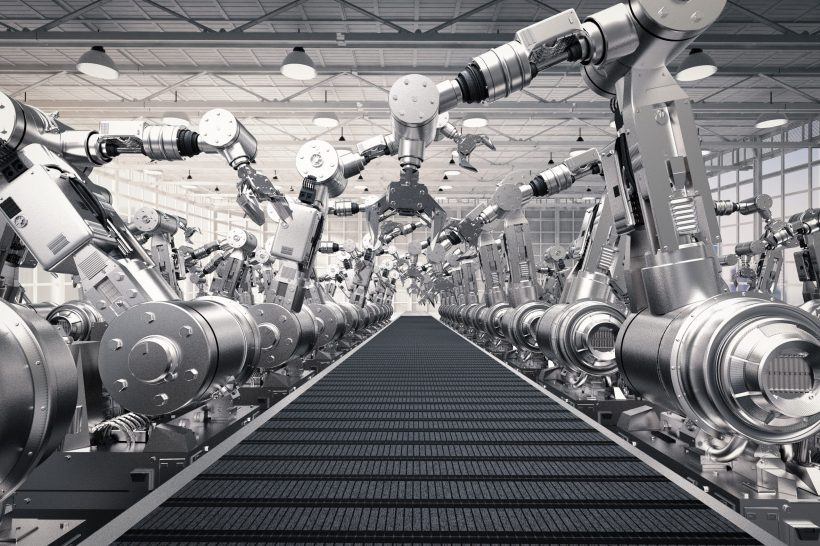 3D printing combined with industrial robots could be a novel yet promising approach to manufacturing.

Two main drivers are pushing its development: the need to additively create large objects more accurately and repeatedly, and also the opportunity to achieve more automated and integrated production with 3D printing. As manufacturing technologies evolve, this combination could be one of the solutions to the growing move towards greater digitisation and smart manufacturing.

The combination of the industrial robots and 3D printing can be achieved in two ways. The first way is to equip a robotic arm with a material deposition head.

Stratasys has done just that with its Robotic Composite 3D Demonstrator, unveiled at IMTS in 2016. The extrusion head based on Stratasys’ FDM technology was combined with the industrial 8-axis motion control hardware, enabling the production of larger, lighter and precise parts from thermoplastic filaments.

Another way to bring 3D printing and robotics together is by creating an integrated solution where industrial robots assist 3D printing at various production stages. A good example is US-based 3D printing service, Voodoo Manufacturing, which has created an industrial robot to automate the manual process of replacing a printer’s build plate, increasing the productivity on the factory floor.

Post-processing 3D printed parts can also be automated with the help of robotics. Methods 3D, a US 3D printing company, demonstrated the automated washing, curing and final finishing of additively manufactured parts, enabled by Fanuc robotic arms, at IMTS 2016.

The benefits of robotics

Industrial robots are automated machines capable of high repeatability and freedom of motion in multiple axes. 3D printing is renowned for the ability to create parts with complex geometries in a fast and cost-effective way. When combined, robotic additive manufacturing can potentially create large-scale objects.

With a multi-axis robotic arm, a robotic 3D printer can move in various directions and 3D print at different angles, expanding the freedom of creating complex shapes even further. Additionally, this type of technology typically doesn’t use any support structures. Although this means that objects made with robotic 3D printing have to be self-supporting, this challenge can be resolved by reorienting the building platform, making overhangs possible.

The combination of robotics and 3D printing is also beneficial in terms of better material management. 3D printing reduces material waste, as the material is deposited only where needed. Robotic 3D printing therefore presents a sustainable approach to manufacturing.

While the market for robotic additive manufacturing is still in its infancy, although it offers solutions, using various materials and technologies, for a number of industries.

For example, the metal casting industry can benefit from the Robotic Additive Manufacturing (RAM) system, developed by Viridis3D. Currently, Viridis3D offers four RAM systems, developed in partnership with EnvisionTEC. Unlike Stratasys’ FDM-based Robotic 3D printer, the RAM system involves binder jetting technology and works primarily with sand. It uses an ABB industrial robotic arm with an inkjet head, which deposits layers of sand and liquid binder onto a printing platform. The sand is gradually fused together, creating a large solid object.

One of the users of the RAM system, the Hazleton Casting Company, believes that robotic sand 3D printing is a game changer for the metal casting industry, in part because it provides a scalable platform for producing custom, geometrically complex sand cores and moulds faster and on demand.

3D printing and robotics: use cases

The construction industry could be one of the biggest beneficiaries of robotic 3D printing. Some construction firms have turned to the industrial robotic arms to 3D print with a range of materials.

French start-up XtreeE, for example, has equipped an ABB robotic arm with a concrete extruder to create complex geometric structures as tall as 14 m. This 3D printer enables designers and architectures to experiment with different shapes thanks to the freedom of movement of the industrial robotic arm. In partnership with civil engineering and architecture companies, XtreeE has developed an impressive projects portfolio. Exploring the concepts of sustainable design and construction, the XtreeE’s projects include 3D printed facade panels, columns, benches and even pavilions.

Robotic additive manufacturing with metal is also possible. MX3D Metal is a great example of a hybrid 3D printer, developed by Dutch company MX3D. The 3D printer combines an industrial robot and a welding machine to create large metal three-dimensional constructions. Using a range of metals in wire form, the machine melts and fuses a small amount of material at a time, producing a free-form structure without using supports. The company made headlines with the 3D printed 12-metre-long steel bridge last year, which is to be finalised and installed by the end of 2018.

Another company advancing robotic 3D printing applications in construction is London-based Ai Build. Since the foundation in 2015, Ai Build has been developing artificial intelligence and computer vision to be used with large-scale 3D printing. This resulted in AiMaker – a robotic, AI-powered 3D printing tool head, which can be attached to any robotic arm, enabling additive manufacturing of large-scale architectural pieces from plastic. AI algorithms in combination with sensors and cameras enable AiMaker to monitor the printing process and detect any occurring issues.

Looking to the future

Intelligent industrial robots and additive machines combined with artificial intelligence could have a much broader range of applications, including smart and automated repair. The Swinburne University of Technology, in partnership with the Innovative Manufacturing Cooperative Research Centre (IMCRC) and Tradiebot Industries, is working on a project called Repair Bot. The project is aimed at the development of an automated repair service for plastic car parts. 3D scanning and 3D printing will be used to create a replacement part, while industrial robots will automate the assembly process.