The Role of Nesting in Polymer 3D Printing 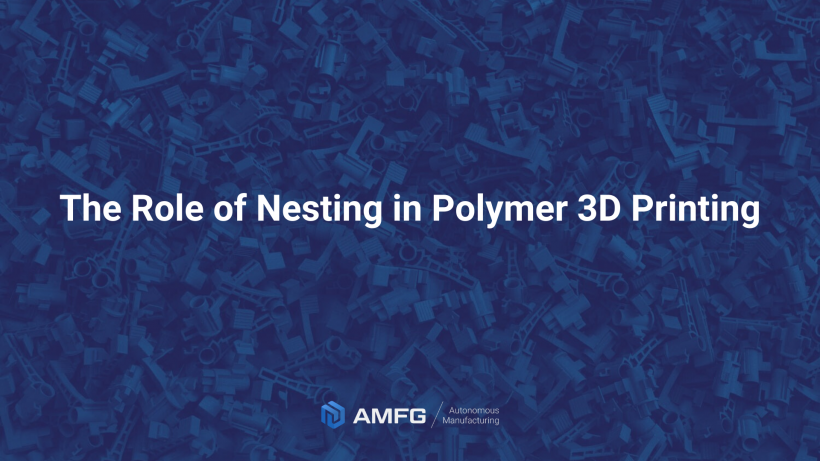 When running a 3D printing business, lowering the cost of printing is one of the first goals on the list. One way to achieve cost savings and optimise the use of your 3D printing fleet is through nesting, a common step during the data preparation process for 3D printing.

Today we’ll be taking a look at what nesting is, its benefits, as well some tips that will help you apply nesting more efficiently.

What is nesting in 3D printing?

In 3D printing, nesting is part of a build preparation stage that optimises the use of the build volume of a 3D printer.

Nesting can be compared to Tetris, a game where you need to arrange the falling blocks of different shapes to fill the line, whereas with nesting you try to pack as many parts as possible into one 3D printer to save costs and increase machine productivity.

Automated or manual, nesting sorts, orients and arranges 3D files to maximise space inside a 3D printer, without interfering with no-build areas. Inefficient use of nesting can lead to material waste and printing errors.

Why should you use nesting in 3D printing?

In PBF, the printing process involves the use of powdered polymers and a heat source. When one layer of powder is spread, a heat source traces the contours of the part defined by the software, fusing the material. The process is repeated until the parts are produced.

The finished parts remain in the 3D printing chamber, full of unfused, loose powder and need to be removed and cleaned.

The loose powder that surrounds the printed parts also works as a support material and can be partially recycled and reused.

Materials for PBF are expensive and can constitute a large portion of a part’s cost. To maximise the output of a PBF 3D printer, while introducing greater material efficiency, a company needs to take full advantage of its capacity.

Nesting has emerged as one of the solutions to enable higher packing density – which, essentially, means packing as many parts as possible in one build, for the optimal use of machine capability.

By packing in more parts, you can print the same amount in less time or more parts in the same build chamber.

In PBF, you always have to use more powder than is required to print a part. The actual quantity is defined by how high your model is. The unused powder can be reused by mixing with fresh powder, but, in many cases, a lot of powder is wasted.

For example, one service provider has estimated that out of 500 kg of powder it buys per month, ‘25% becomes a part, 25% is waste and 50% is reused for refreshing the next build’.

By optimally nesting your parts and reducing the height of your build platform, you can save material, as well as speed up your production.

When calculating the cost of a 3D printing part, one of the most important factors is the part’s bounding box, which refers to the rectangle space that contains your entire 3D model and determines the amount of space that the part will take up inside of the 3D printer.

By nesting your pieces optimally, you can fit more pieces into one bounding box. This will allow you to print more parts at a time, meaning, you produce faster and waste less powder – saving you unnecessary expense.

According to some estimates, nested models can provide around 30 per cent in savings. Designing parts with nesting in mind can further increase the savings up to 60 per cent.

That said, not all parts will benefit from nesting. Sometimes it’s more economical to print parts in separate bounding boxes, as shown on the image below.

Today, the nesting capability can be found in most 3D printing data preparation solutions. Many such software solutions offer manual nesting, which tends to be time-consuming and requires skill to find the best possible combination of parts on the plate that minimises the space.

A rule of thumb is to start with the largest model and arrange the smaller parts around it, or, if possible, inside it.

Several tools on the market also offer automated nesting, like Materialise Magics and Netfabb, helping to speed up the nesting process.

Automated nesting tools can use one of the two types of part nesting: bounding box or geometry-based nesting.

Bounding box nesting takes the maximum X, Y and Z values of your part and forms a box around the part. Geometry-based nesting looks at the surface of the part and spaces based on actual part geometry.

The downside of the bounding box nesting is that it can be difficult to reach higher part densities with it. A good practice is to manually pre-nest parts before using software to run auto-nesting algorithms.

Whether in automated or manual nesting, it’s important to leave at least a 1.5mm gap between all of the components in your 3D file with SLS processes and a 5mm gap in MJF processes. This will prevent parts from fusing during the printing process.

Nesting is a crucial step in data preparation for 3D printing. It helps to optimise machine capacity, reducing costs and printing time, while increasing machine productivity.

Ultimately, considering nesting early in the design process will enable you to run a more profitable 3D printing business.