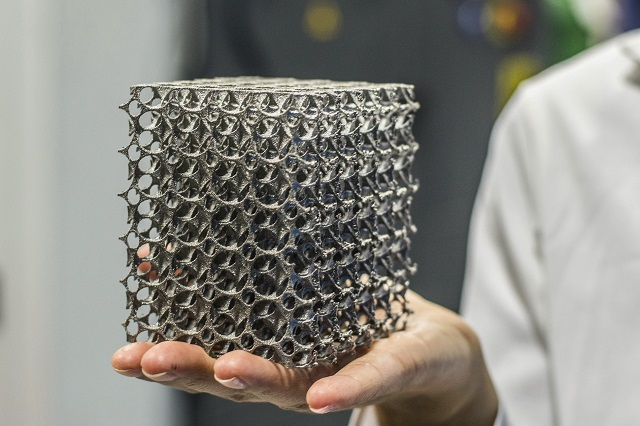 Metal has been fundamental in every industrial revolution our society has undergone, catapulting us into the manufacturing scene we inhabit today. Now, it is playing a central role in technological development once more, by way of additive manufacturing.

3D printing is facilitating the production of metal parts unlike anything that traditional manufacturing modes are capable of. This is largely due to AM uniquely supporting the high energy processes needed to tackle the extreme melting points of such materials, unlocking possibilities that this obstacle had previously barred.

However, whilst the benefits of equipping AM towards manufacturing metal are reaching increasing recognition, the optimisation of processes involved and products formed still has a long way to go. As 3D printing rapidly gains visibility within the manufacturing sphere, talented and eager minds are applying themselves to the technicalities of making this happen.

The prospect of manipulating a material renowned for its obdurate strength has understandably monumental implications for production. However, there is a notable knowledge gap surrounding the technology. This article endeavours to introduce some clarity, uncovering exactly how metal AM works and why manufacturers are increasingly turning to it.

Why opt for metal AM, or why not?

As is always the way, additively manufactured metal parts sport a number of advantages over their conventionally manufactured counterparts, whilst in other ways they lag a little behind ideal standards.

Let’s begin with the positives. First and foremost, equipping 3D printing to produce a metal part opens the door to extreme precision of assembly. AM technologies are often able to generate complex geometries which traditional processes are incapable of.

To continue with this comparison, metal manufacturing often suffers from high levels of wastage, casting off swathes of valuable and typically expensive materials in the process of creating a part. This is exemplified in such calculations as the aviation industry’s ‘buy-to-fly’ ratio, invented to calculate just how much of initial material ‘bought’ has actually been used in the final air-borne specimen. Metal AM, however, skirts around this problem by specifically working with powdered metal. By nature, unused substance from one build can easily be recycled in the next.

One recent example of this is the RAF’s adoption of the ‘Calibur3’ metal 3D printer, designed by machine construction company Wayland Additive and specialising in EBM. The investment signals a step towards enabling on-demand printing of aircraft spare parts, an innovative solution to malfunctions which is currently under development.

There are, however, areas in which metal AM has space to improve. Compared to traditional metal part construction, metal additive manufacturing has conventionally been much slower. With the discourse surrounding 3D printing so frequently turning to production speed as a central advantage, metal AM protrudes as an exception.

To add to this, metal AM as it currently stands leans heavily on post-processing services to ensure that parts are up to par with other items on the market. This is due to the printing process’ inability to ward against defects, necessitating services like Hot Isostatic Pressing (HIP) or annealing.

The advantages and disadvantages of metal AM, like the 3D printing scene at large, inhabit a state of constant flux. Indeed, new and promising technologies offer noteworthy improvements, as the next section of this article will explore.

How does metal AM work?

For many years, powder bed fusion technologies, such as selective laser melting (SLM) and direct metal laser sintering (DMLS), have been recognised as the default for metal additive manufacturing. Boasting many years of maturation, and a broad understanding of its processes by manufacturers, it continues to exert its dominance in the field.

Typically, to create a metal part by way of powder bed fusion, a highly concentrated laser is directed towards a bed of metal powder, melting it (SLM) or fusing it (DMLS) together at very precise points. The laser outlines one thin layer of the part’s cross-section, before a distribution system spreads on a fresh coating of powder for the laser to melt next. The technology moves up in this way layer by layer until the part is complete, at which point residue powder is removed and relevant post-processing is initiated.

Laser melting processes facilitate the production of both extremely intricate structures and very dense pieces. However, a plethora of complications often follow in its wake. This form of 3D printed metal can tend towards a weak fatigue life, due to small imperfections instilled throughout the printing process, leading to cracks. Furthermore, loose metal powder is generally hazardous, often flammable and posing respiratory threat. This necessitates the implementation of PPE alongside other precautions during printing.

The days of powder bed fusion’s reign may be coming to an end. In the Spring 2022 publication of Metal AM magazine, Managing Director Nick Williams noticed an increase in competition between metal AM technologies, pinpointing an overall shift in discourse from ‘AM versus subtractive manufacturing’ to ‘AM versus AM’.

One technology standing tall next to powder bed fusion is binder jetting (BJT), a technology which has been emerging over the recent years. This process involves layering fine drops of polymer binder onto metal powder rather than melting it using a laser. These parts are then carefully depowdered and separately sintered to fuse them into fully metallic pieces.

A particularly incredible feature of BJT as an approach to metal manufacturing is the speed and scale at which the process can be executed. Though the fineness of laser melting has its advantages, it can only cover singular regions at a time as a result. Binder Jetting, alternatively, can deposit large spreads of binder all at once, allowing multiple parts to be printed simultaneously.

Many are eagerly calling Binder Jetting the spark that will catalyse mass-production of metal AM parts. Yet, BJT territory remains largely uncharted. The process still depends on loose powder, carrying over the issues this raises in powder bed fusion’s case. Furthermore, manufacturers must inconveniently account for the shrinkage of their parts once the binder is burnt away during post-processing sintering.

How is the metal AM scene changing?

Traditionally, as is the case for much additive manufacturing activity, metal AM has been turned to primarily for prototyping purposes. However, increasingly, the production scope made available by the technology is steadily expanding, placing it firmly in the industrial spotlight.

This year, the National Institute of Standards and Technology (NIST) invested almost $4 million in metal additive manufacturing, as part of the U.S. push towards sustainable manufacturing. The move comes on the heels of the Biden administration’s ‘AM Forward’ initiative, funding the research necessary to overcome the technology’s current limitations.

Relativity has expressed certainty that Stargate 4th Generation could generate a rocket with up to 100 times fewer parts than are conventionally necessary for such a project in mere months. Metal AM excitingly occupies a cardinal position in some of the additive manufacturing field’s most revolutionary developments.

The Future of Metal AM

3D printing of metal is gaining increasing momentum within the manufacturing scene. There are a number of particular targets that must be met, however, for the technology to become widely relied upon.

Firstly, the workflow tied up in the technology must be significantly refined. Considering the multiple-step nature of the printing process, it is important to streamline operations as much as possible until new systems are developed.

Secondly, high-volume printing of metal must become feasible, both technologically and in management terms. Binder jetting seems certainly to be forming a path into batch production; businesses must prepare for subsequent spikes in demand.

These two requirements can both be met by way of a capable MES & workflow software solution. From the automation of order management, optimising print efficiency, to post-processing and quality management, central steps in metal AM particularly, a platform like AMFG is perfectly suited to perform these functions.

A new chapter of possibility is beginning where metal AM is concerned. The developments which we are seeing today mark the continuation and exponential escalation of this exciting growth.

Enjoyed this? Check out our last article, ‘How 3D Printing Can Save Lives: Additive Manufacturing in the Medical Industry, 2022’.