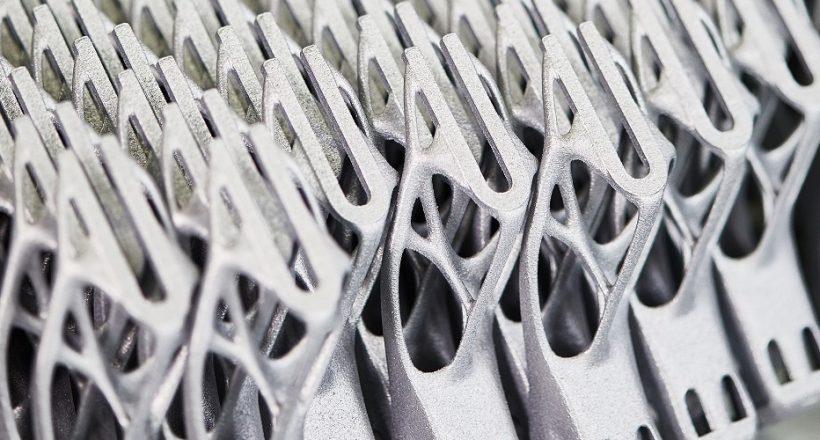 Throughout additive manufacturing’s development, one question continues to emerge time and time again: to what extent can AM technology revolutionise the conventions surrounding large-scale production?

Seeking an answer to this, and continuously pushing machine capability to the next level, mechanically focused R&D has been driving forward the parameters of 3D printing since its inception. From the technology’s first seed, centred around delivering small-scale prototyping, its scope has undergone thrilling expansion.

There is not one set angle from which to approach such a task. Complex mechanisms require complex approaches; though the base level objective of expanding build volume constitutes a straightforward target for development, delivering this successfully requires considering a host of additional factors such as temperature consistency, product quality and print speed, to name only a few.

Simultaneously, however, this excitingly diversifies development within the sphere. Rather than all tussling to acquire the same singular feature, each new machine boasts unique capacities suiting them to different companies’ needs. Large-scale production as an end objective is giving rise to a multitude of other exciting functionalities.

2022 has witnessed the release of several powerful AM alternatives to traditional mass production machines; the incoming year is garnering anticipation, with murmurings of further innovation already circling.

We’ve selected a few outstanding machines hitting this target, each sporting a distinct characteristic setting it apart in the market. Technological advancement has never been an easy feat, but these engineers are making it look like it is.

3ntr’s new Sequoia machine, unveiled at the Italian manufacturing trade show Mecspe 2022, is making a name for itself through its combination of large production capacity and high quality results. Commercially buoyed by way of the catchphrase ‘look up, think biggest!’, the company has outspokenly set its sights on permeating the market for large-scale production.

The Sequoia features a striking 1200 x 1100 x 900mm build volume, positioning it in the upper catchment for size across AM machinery. However, importantly, this 3ntr appliance also promises impressive part quality, an exceedingly difficult achievement where large formats are concerned.

As Joris Peel explains in his article about the machine for 3DPrint.com, “bigger is harder, since it requires more control, a better chassis, more engineering, and more precision”. Tackling this challenge, the Sequoia thus offers a unique level of capability, securing its position on this list.

One functionality contributing to maintaining part quality on such a large scale comes in the temperature optimisation the machine can deliver. Through the collaboration of temperature-controlled nozzles and an actively heated chamber, the Sequoia can precisely adjust to the manufacturer’s chosen material. From commodity-based materials such as PLA and ABS, to engineering polymers, like Nylon and TPU, this aptitude also expands use-case scope, suiting it to manifold applications.

With batch size capacity over 7 times larger than another of 3ntr’s large format printers, the A2v4, this machine is setting the pace for engineers seeking to venture into scaling the limits of AM production.

The X160Pro was released in March of this year alongside its two smaller sibling printers, the medium range X25Pro and compact InnoventX. With a build volume standing at 800 x 500 x 400mm, it has been deemed “the world’s largest binder jet 3D printer” for metal, ceramic or composites.

In this printer comes another machine directly designed to attack the market for large format AM production. And an ‘attack’ it truly is, as is indicated by Desktop Metal Co-Founder and CEO Ric Fulop’s fierce tone in the press release announcement of the X-series: “our team is moving aggressively to drive additive manufacturing into mass production through a focused strategy of production-capable printers, high-performance materials, and key applications.”

Much of the press surrounding this line of printers groups the trio together in descriptions of their competencies. Their shared implementation of Triple ACT technology is of note, a feature delivered via Desktop Metal’s acquisition of ExOne. Counteracting the most prominent complications associated with powder-based printing – dispensing, spreading, and compacting – Triple ACT specifically enables the “repeatability required […] in larger build areas”, as ExOne’s 2019 whitepaper explains.

Let’s hone in on the X160Pro’s individual functionalities. Printing in more than 6 metals, with a build volume “more than 2.5X bigger than other systems” and at rates of 10,000 CMM per hour, it hosts an impressive catalogue of qualities. Recent investments in the technology are testament to its proficiency; the Ultra Safe Nuclear Corporation (USNC) was swift to adopt the X-Series, equipping the “advanced material capability of the […] machines” for their “complex serial production”, as Kurt Terrani, Executive Vice President of USNC’s Core Division, explains. In particular, its compatibility with specialised materials such as silicon carbide has fitted the printers to expedite next generation nuclear reactor design.

Desktop Metals prides itself on the 20+ years of its metal AM machine development; as they continue to research and innovate, we can continue to expect exciting new releases from them.

Cultivated in direct conversation with customers from 3D printing’s most invested industries, ranging from aerospace to energy and defence, the Sapphire XC 1MZ is designed with large-scale production visibly at the forefront of its purpose.

The machine facilitates a cost-per-part reduction of up to 75% in comparison to the Sapphire, alongside faster printing speeds and housing 8 1-kW lasers, four times as many as its forerunner. Cutting costs and increasing speeds, whilst also offering incredibly powerful production volumes, this machine ticks all of the boxes crucial to scaling AM production.

It is no wonder, then, that this printer flew off metaphorical shop shelves when it became available for purchase. Velo3D’s CEO Benny Buller shared that their $19.6 million in revenue in Q2 of this year was propelled by the “very high” demand for this machine, almost tripling the revenue they tallied in Q2 2021. Upon publishing these results, Velo3D’s shares skyrocketed by 41.6%.

According to Jory Bell, General Partner at Venture Capital company Playground Global, the machine is specifically designed to “print huge parts for critical industries that no one expected was possible, even just a couple of years ago”. In the wake of such success, the Sapphire XC 1MZ is shaping up to be a gamechanger in the industrial 3D printing sector.

Having climbed the proportional ladder throughout this article, we arrive at a machine whose name gives away its sheer revolutionary scale; standing at a satisfying and phenomenal 1000 x 1000 x 1000mm, Roboze’s ARGO 1000 is one of a kind.

Setting this apparatus apart is the scale of its heated chamber, specifically suited to producing large-scale parts. The difficulty of maintaining a consistent temperature throughout such an extended span of space has previously restrained triumph in this area of development. Furthermore, machine components must be themselves acutely adapted to the extreme temperatures facilitated.

However, following years of diligently conducted research and development, Roboze has made groundbreaking strides. As Carolyn Schwaar describes in a recent article for All3DP, the ARGO 1000’s heated chamber creates “a homogeneous working environment aimed at consolidating the parts with a perfect thermal fusion of each layer in order to achieve exceptional mechanical properties”.

Supporting production employing super polymers and composites, Roboze’s revolutionary device offers functionalities sharpened towards manufacturing end-use industrial parts with durability and thermal resistance not to be reckoned with. As a result, qualities conventionally afforded to metals find a home in more lightweight parts, an invaluable constitution.

Presenting drastic reductions in production time, repeatability equal to 99.96%, and industrial automation capacities, the ARGO 1000 is carving a name as a holy grail in waiting. Whilst it is yet to hit the market, the anticipation for its 2022 arrival is brewing.

What would this article be without a mention of Relativity’s recent iteration of the Stargate 4th Generation 3D printer? Taking ‘scalability’ to stratospheric levels, both figuratively and literally, this machine is heavily involved in the production of Terran R, the company’s own-brand rocket set to enter low-Earth orbit.

A particularly exciting feature of the Stargate 4th Generation is its dismantling of an often unmentioned paradigm within 3D printing: the convention of horizontal production. Axis expansion has long been the muse of the CNC machining scene, with efforts to break into 5, 6, 9, and 12 axis machining making ripples within the space. It is high time that AM ventures further into this territory. As Scott Van Vliet, SVP of Software Engineering describes, Relativity is spearheading this movement by “flipping the script and going horizontal”.

Increased production scale is the exciting benefit of this innovation. The Stargate 4th Generation is capable of manufacturing parts up to 120 feet long and 24 feet wide, all at speeds 7x faster than previous versions of Stargate. Relativity is truly transforming what it means to print ‘at scale’.

Though the Terran R’s particular use-case is understandably dominating coverage of the printer, Relativity has stated belief that the machine will “offer tremendous value-generating potential for other end-product use cases within the $1T aerospace, aviation, energy and defence industries”.

Relativity Space is preparing to employ Terran R in launching a Mars Cruise Vehicle designed by Impulse Space, granting them an integral position in what could be the first commercial payload delivery to another planet. With the time window for launch commencing in 2024, The Stargate 4th Generation is unlikely to disappear from public orbit anytime soon, making its mark both on high-level industrial printing spheres and beyond.

Additive manufacturing technologies are  getting ‘bigger’ in more than one sense of the term, both expanding in size and volume capacity, and setting its sights on increasingly ambitious aspirations for production.

As newer and more exciting capabilities are unlocked, however, it remains important to take them outside of the showroom and consider how their day-to-day use can be optimised. For this, workflow automation software like AMFG’s is vital.

From 3ntr’s Sequoia to Relativity’s Stargate 4th Generation, the utter breadth of unique and trailblazing competencies afforded by additive manufacturing evidences the incredible potential of the technology. It is hard to imagine that the engineers rejoicing over its aptitude for prototyping in the late 80s could have fathomed the distances that it has come today.

Enjoyed this? Check out our last article, ‘How is Automated Scheduling Driving Efficiency in Serial AM?’