AMFG, the leading provider of automation software for industrial 3D printing, today launched a new software platform that uses artificial intelligence to automate additive manufacturing production for the first time. In conjunction with its launch, the UK-based company, formerly known as RP Platform, also announced a brand name change to AMFG as it expands its software capabilities to target AM end part production.

With over 70% of OEMs already implementing 3D printing, the technology is a game-changer for manufacturing. AMFG’s AI capabilities provide manufacturers with complete production automation for end use parts, including scheduling automation, printability analyses and post-processing automation.

“Our vision is for our software solution to enable autonomous additive manufacturing.”

“While 3D printing has the potential to transform manufacturing, we’ve seen the lack of a scalable production process as a key barrier. Our software closes this gap by incorporating machine learning algorithms to provide an end-to-end solution for the 3D printing manufacturing process.” 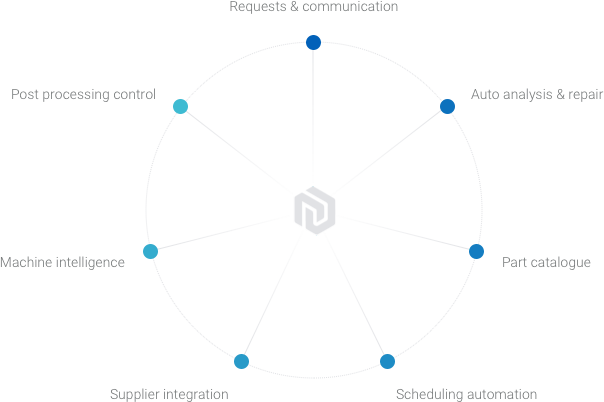 AMFG has fast become one of the leading automation software providers for industrial 3D printing, with customers in over 30 countries, including global leaders across the automotive, aerospace, consumer goods and education sectors.

“We want to help companies make their 3D printing processes much smoother so that they can produce more parts with greater visibility and less effort.”

“And we have more exciting releases to our software over the coming months that will further enhance our production automation capabilities.”

“Ultimately, we’re creating a truly autonomous manufacturing process for industrial 3D printing. For us, this means taking manufacturing to a new era of production. The launch of our new software, as well as our company rebrand, fully reflects this vision going forward.”