A Guide to 3D Printing With Titanium 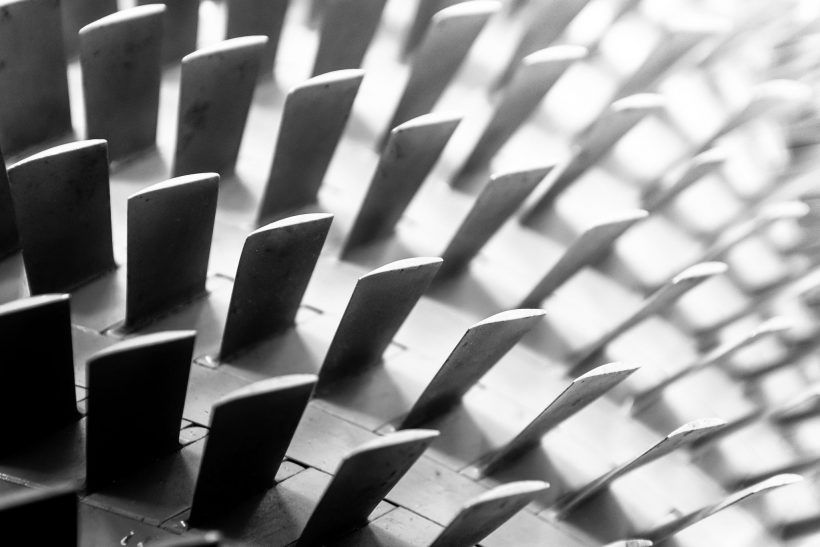 With the benefits of reduced material waste and the ability to create lightweight designs, titanium 3D printing is finding its niche in many industries.

Titanium has excellent material properties, but its high cost has historically limited its use to high-value applications in aerospace. Now that metal 3D printing is becoming increasingly recognised as a viable manufacturing method, the technology is making titanium more available to industries like medical, automotive and motorsports.

Today’s post looks at what makes titanium a good choice  for 3D printing, the technologies that support the material, as well as key industrial applications.

The unique properties of titanium

Think strong, light and corrosion-proof, and you have the essence of what makes titanium such a sought-after material. Titanium is known for its excellent material properties — as strong as steel but with only 60% of its density.

Here, titanium alloys are used in applications that require lightweight parts able to retain their mechanical properties at high temperatures.

Titanium is also known for its biocompatibility, which makes it an ideal choice for medical applications, such as implants.

However, while titanium offers a range of benefits, it remains a relatively expensive material. This is because the metal is mined in relatively small quantities, and processing raw titanium remains a complex task, making the material considerably more expensive than alternative metals like steel.

Titanium can be a difficult metal to work with, particularly when it comes to machining. For one thing, titanium has a low thermal conductivity. This means that when it is machined, for example with a CNC machine, the heat generated is stored in the CNC tool – which could cause the tool to wear out quickly.

Additionally, since machining involves the cutting and removal of material, the process can lead to a lot of material waste being produced. Many companies are, as a result, looking for better alternatives to produce titanium parts.

Metal 3D printing is proving to be that viable alternative.

With metal 3D printing, the most commonly-used grade of titanium is the alloy, Ti6Al4V (Ti64). In addition to Ti64, it’s also possible to 3D print with pure titanium.

The benefits of 3D printing with titanium 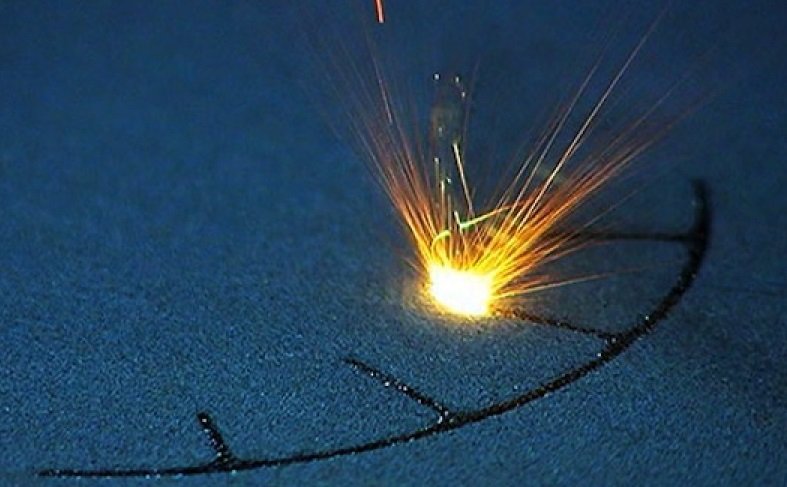 There are many benefits to 3D printing titanium.

For aerospace applications, using titanium to 3D print parts often helps to lower the buy-to-fly ratio. The term, which comes from the aerospace industry, refers to the correlation between the weight of the amount of material originally purchased and the weight of the finished part.

In conventional manufacturing, for example, titanium aircraft components may have a buy-to-fly ratio between 12:1 and 25:1. This means that 12-25kg of raw material is required to produce 1kg of parts. In this scenario, up to 90% of the material is machined away.

Metal 3D printing can reduce this ratio for titanium components to between 3:1 and 12:1. This is because metal 3D printers typically use only the necessary amount of material needed to create a part, generating only a little waste from support structures. For an expensive material like titanium, the cost-savings from this reduced buy-to-fly ratio can be quite significant.

Additive manufacturing can also enhance the lightweight properties of titanium thanks to topology optimisation. Using topology optimisation software, engineers set certain requirements, such as load and stiffness constraints and then let the software tool to optimise the initial design to meet those requirements. Through this optimisation, any unnecessary material is removed from the design, creating a lighter yet strong component.

Topologically optimised designs can often only be manufactured with the help of additive m manufacturing technologies. This benefit is particularly valued by the aerospace industry, where lightweight 3D-printed titanium parts can lead to weight savings and better aircraft performance.

The first efforts to 3D print titanium began in 1997 at the Aeromet Corporation, which used DED technology to produce parts for the aerospace industry.

In DED, a high-intensity energy source such as a laser or a beam is used to melt the titanium powder (or wire) as it is deposited through a nozzle onto the substrate. The key benefit here is the ability to create large parts at a relatively high material deposition rate (up to 320 cc/h).

Swedish company, Arcam, has been developing its EBM technology to enable titanium 3D-printed implants and aerospace components. In EBM, an electron beam is applied to a layer of metal powder, melting and fusing it with the previous layer.

EBM is considered to be more accurate than DED, and suitable for smaller, complex parts. Notably, the EBM process takes place in a vacuum and at a high temperature. This results in minimal residual stresses in 3D-printed parts, which also means the parts don’t require subsequent heat treatment.

In 2013, Arcam released two AM machines, Arcam Q10 and Arcam Q20, targeting the orthopaedic implant and aerospace industries respectively. The Arcam Q20 is particularly designed to work with the Ti6Al4V alloy.

Arcam has also released the Arcam Spectra H 3D printer, which is capable of printing new crack-prone titanium alloys such as titanium aluminide.

Like EBM, SLM is a powder bed fusion process, although it uses a laser beam instead of an electron beam to melt and fuse the layers of metal powder. The thickness of one layer in the SLM process can be as thin as 20 microns, making this technology much more accurate when compared to DED and EBM.

Aerospace dominates the key applications of titanium 3D printing. That said, other industries like medical, motorsports, chemical and marine are also starting to investigate the technology to produce titanium components.

Many of the biggest aerospace companies are incorporating 3D-printed titanium parts into their aircraft.

For example, aerospace supplier, Liebherr-Aerospace & Transportation SAS, started the serial production of 3D-printed titanium nose landing gear brackets for the Airbus A350 XWB earlier this year. These brackets will be the first Airbus parts to be produced with 3D-printed titanium.

Boeing, too, has placed its bets on titanium 3D printing. Since 2015, Boeing has been in partnership with Norwegian metal 3D printing company, Norsk Titanium, to produce large structural titanium components for the 787 Dreamliner. In 2017, they FAA-qualified the unnamed titanium part, made with the help of Norsk’s proprietary Rapid Plasma Deposition (RPD) technology.

Based on the DED process, RDP uses titanium wire with plasma torches to print large titanium structural components. The technology is reportedly 50-100 times faster than powder-based systems and uses 25-50% less titanium than forging processes. The accelerated lead times and reduce material waste could save Boeing up to $3 million per aircraft.

Currently, titanium 3D printing is being explored largely for smaller aircraft components such as brackets and housings. In future, however, its use may expand into much larger structural components, fuelled by the savings in weight, cost and development time.

Titanium’s non-toxicity, high strength and resistance to corrosion make it an attractive material for orthopaedic and dental implants.

When used with 3D printing, medical device manufacturers can create implants with complex, porous structures. Remarkably, these structures imitate the structure of human bones so the bone cells recognise it as a scaffold through which to grow.

Compared to aerospace and medical, the automotive industry hasn’t been as quick to adopt titanium 3D printing. Even though the same benefits apply, the consumer automotive market is very cost conscious, which limits the use of this expensive material in most vehicles.

Currently, titanium 3D-printed parts can be found in racing cars and luxury vehicles where weight and performance are significant factors.

One of the most prominent examples of using titanium 3D printing in automotive is Bugatti’s brake caliper, developed for its Bugatti Chiron supercar.

An essential part of the braking system, the brake caliper measures 41 x 21 x 13.6 cm and was 3D printed in 45 hours using SLM technology. The finished part is said to be around 40% lighter than a machined aluminium alternative.

Last year, the company successfully tested the brake caliper, proving that it can meet extreme strength, stiffness and temperature requirements.

In addition to the brake caliper, Bugatti has used titanium 3D printing in the production of an active spoiler bracket. In partnership with Siemens, the part was optimised to reduce weight while still delivering strength, resulting in a 53% weight saving and increased rigidity.

US wheel rims manufacturer, HRE, is another company to benefit from titanium 3D printing. HRE’s primary goal was to reduce the amount of material wasted when producing wheel rims.

Using EBM technology, HRE 3D printed a complex-shaped wheel rim and achieved a weight reduction of 19% in the process.

With traditional production methods for this application, the material waste generated can reach up to 80%. With 3D printing, HRE says the wasted material doesn’t exceed 5%.

HRE considers the wheel rim more of a technological showcase rather than a commercial product. That said, the project offers a glimpse into what the future of wheel design and manufacturing could hold.

One example comes from Oxford Brookes Formula Student team. In partnership with the UK’s Manufacturing Technology Centre (MTC), the team redesigned the uprights of the vehicle and and manufactured them  using the EBM technology.  Thanks to this process, the team achieved 50% in weight savings.

The challenges of titanium 3D printing

Despite the advantages of titanium 3D printing, there are a few challenges that need to be taken into consideration.

First is the need to develop standards for using titanium with additive technologies. Some companies are already taking steps in this direction. In 2018, Boeing and Oerlikon signed a five-year partnership focused on standardising titanium 3D printing and ensuring printed components meet FAA and DoD flight requirements.

To reduce the actual material cost per kilogram of titanium, some powder producers have developed alternative powder production methods. Canadian PyroGenesis, for example, is using its NexGen™ Plasma Atomization System, which produces metal powder, including titanium, at over 25 kg/h. Higher production rates allow the company to produce titanium at competitively lower price points.

In September 2018, Metalysis began the commercial production of titanium powders, in addition to other alloys, looking to deliver between 10 and 100 tonnes of metal powders per year.

If new titanium powder manufacturing methods are able to deliver on their potential, the average price of one kg of titanium could be reduced by 17% by 2024, according to SmarTech Analysis.

Titanium 3D printing has become a valuable technology within aerospace, medical and automotive. The key reason for this is the winning mix of titanium’s excellent properties and 3D printing’s ability to reduce waste and create complex and lightweight designs.

Going forward, as the cost of titanium lowers and more applications are discovered, titanium 3D printing will become a great manufacturing alternative for a much wider range of industries.