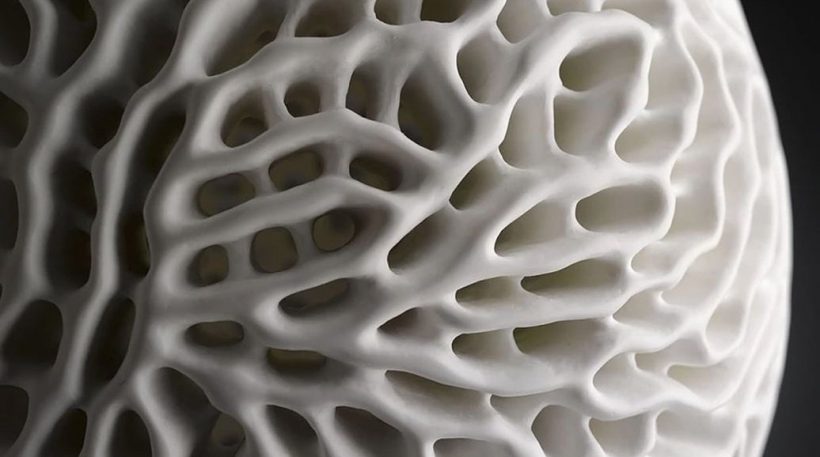 By taking advantage of the design flexibility afforded by 3D printing, engineers can bring even the most challenging ideas to life.

3D printing is a technology that can produce shapes and features unachievable with conventional manufacturing methods. To showcase the power of the technology, we explore 7 examples of impressive designs that were achieved only with 3D printing.

French automaker, Bugatti, leveraged the design freedom of 3D printing for its latest Chiron supercar, producing what is said to be the world’s most powerful brake caliper — 3D printed in titanium.

While the brake caliper functions just like a normal caliper, the combination of 3D printing and titanium means that it is much stronger and roughly 40% lighter than the aluminium part currently in use.

Using a metal 3D printing process called Selective Laser Melting, the Bugatti team was able to experiment with a variety of geometries and wall thicknesses unattainable with traditional manufacturing techniques.

The result: an intricately-shaped brake caliper with wall thicknesses between 1 mm and 4 mm.

The end of 2018 saw Bugatti successfully testing the caliper at high loads, and the company is now preparing to take the component into production.

However, Bugatti is not the only company revolutionising the design of brake calipers. British automotive technology company, Carbon Performance, is also using 3D printing to ‘generate sustainable designs’ for 3D-printed automotive parts, including calipers.

To achieve this, Carbon Performance is using its new, AI-powered software platform. The platform helps to design components that can, for example, improve the fuel efficiency of a car.

Using its design software and 3D printing, Carbon Performance is able to produce brake calipers that are more robust and environmentally friendly thanks, in part, to their lighter weight. Being able to create lightweight metal parts with 3D printing means less material is required and the production process incurs less material waste than with subtractive manufacturing.

Creating lightweight designs is one of the key benefits of 3D printing. As the trend towards electric and more efficient vehicles continues to grow, we’ll see more automakers exploring 3D printing in their efforts to create better-performing, lightweight car components.

Generative design software uses advanced algorithms to automatically generate multiple design variants based on specific parameters such as weight, material, size, strength and manufacturing methods. The subsequent designs feature complex, organic shapes which often can only be brought to life with the help of 3D printing.

This was exactly the case with GM’s seat bracket. Using Autodesk’s Fusion 360 generative design software, 150 design iterations were produced. GM then selected the design that offered the best trade-off between weight, performance and manufacturability.

The final design barely resembles the original bracket. 3D printed in metal, the new seat bracket is 40% lighter and 20% stronger than the original. It has also been manufactured as a one component, unlike the original part which has to be assembled from 8 separate parts.

The ability of 3D printing to create complex parts more quickly and with more flexibility makes the technology a natural choice for producing the redesigned component. The benefit shown in this example is part consolidation —  the ability to print multiple parts as a one component, and thereby reduce assembly times and costs.

Although GM’s seat bracket remains a proof-of-concept, the company sees huge potential in combining  3D printing and generative design software. Both technologies will certainly a key role in the future of vehicle manufacturing by facilitating faster design and product development, as well as  the production of complex automotive parts.

Topology optimisation is a generative design technique that enables designers to apply advanced algorithms to optimise the geometry of a part. Using the technology, the material distribution of a part can be optimised to remove any unnecessary material from the design.

3D printing offers a range of benefits for hip implants, including the ability to customise an implant for the specific loads it is required to bear. Topology optimisation software facilitates this by allowing engineers to factor in the various load cases a hip implant might see during its life cycle.

By inputting parameters such as load cases and design constraints, the software optimises the material distribution within a defined material volume. This process results in a design showing where material can be removed to create the best-performing hip implant.

The Altair team used this approach to determine the solid and semi-dense areas of the implant before filling the semi-dense regions with lattice structures to make the implant lighter.

Compared to an intact femur or a femur with an off-the-shelf implant, the team found that the new design helps increase an endurance limit to about 10 million cycles. This means that the hip implant could endure jogging from Los Angeles to New York and back — twice.

The new design also helps to reduce stress shielding by 57%. Stress shielding refers to the reduction in bone density caused by placing a titanium implant inside a patient, and can ultimately lead to fractures and dislocation. For this reason, designing an implant as close to the original bone tissue as possible is key to reducing stress shielding and eliminating these unwanted effects.

Using 3D printing as a manufacturing technology is the only way to bring such designs to life. Not only does it make complex shapes like lattices possible, but it also can produce them more cost-effectively than conventional methods.

As of today, topologically-optimised 3D-printed implants are only starting to make their way into real-life use cases. It will take some time for healthcare regulators to develop new standardisation methods for these new implant designs. However, looking in the future, it’s clear that 3D printing will become a key technology for creating better-fitting, longer-lasting and higher-performing hip implants for a specific patient.

Unveiled at Dutch Design Week in 2018, MX3D’s stainless steel 3D-printed pedestrian bridge is one of the most exciting design projects in the 3D printing space.

By fitting welding machines onto robotic arms, the MX3D team was able to 3D print a bridge 12 metres long, achieving a unique look and shape. For instance, the design of the bridge is organic and fabric-like, with lots of curves and intricate features. The surface of the bridge has been left unsmoothed, leaving the layers of deposited steel visible that give the bridge a rough, unusual finish.

Interestingly, 3D printing wasn’t the only cutting-edge technology used for this project. To ensure both the safety and optimised performance of the bridge, the 3D-printed steel structure is equipped with a network of sensors to monitor the state of the bridge, recording the number of people walking across it and taking measurements of things like weight dispersion and air quality.

The whole project took nearly four years to execute and now the completed bridge is set to be installed in Amsterdam later this year.

GE Research is developing an ultra-efficient, low-emission heat exchanger for power generation equipment like gas turbines. Surprisingly, to achieve this, the team came up with an innovative design inspired by human lungs.

Human lungs are one of the most efficient and compact heat exchangers. The organ performs its heat-exchange function with a network of capillaries, which split the flow of blood into small streams. This network warms up the cooler air that we inhale, while also regulating the body’s temperature.

GE’s heat exchanger works in a similar way, but at much higher temperatures and pressures. The component features a trifurcating network of channels, which takes hot air coming out of a gas turbine. This network is intertwined with another network of channels filled with colder working fluid running in the opposite direction. The hot air and cool fluid do not mix with each other, but their close proximity allows  the hot air to be cooled down, improving the thermal efficiency of a gas turbine.

Crucially, 3D printing was the only technology capable of producing such a complex design.

Once the development process is complete, GE will be able to 3D print a heat exchanger that can operate cost-effectively at 250°C (450°F) degrees higher than today’s heat exchangers. With a significantly increased operating temperature, the 3D-printed component represents a new generation of high-performance heat exchangers.

The roof bracket, a small component that helps to fold and unfold the top of the car, required a new design to maximise the performance of the roof-folding mechanism. To achieve this goal, engineers at BMW turned to topology optimisation software.

By using this software, engineers were able to input parameters like the weight, the size of the component and the load it will take. The software then generated a design that optimised the material distribution of the part.

Thanks to Selective Laser Melting (SLM) technology, engineers created a metal roof bracket that is 10 times stiffer and 44% lighter than the conventional alternative.

The part, which is now produced in small series, showcases a huge lightweight potential for vehicle designs when combined with the power of topology optimisation techniques.

For a few years, engineering company, KW Micro Power, has been working on a design of a microturbine generator but faced challenges with taking this design to production.  A key challenge lay in the production of one of the device’s components.

The component in question is a titanium disc featuring complex internal channels that help to manage exhaust gases more efficiently. When 3D-printed in metal, this component requires support structures to prevent drooping or warping during the printing process.

However, the complexity of internal features of the component made it impossible to remove the supports following production.

To overcome this challenge, the company collaborated with  VELO3D, a 3D printer manufacturer that has developed its proprietary metal 3D printing technology, Intelligent Fusion. This technology enables VELO3D’s Sapphire 3D printer to print parts with minimal  support structures and reduced residual stresses, which are often the cause of warping.

This is achieved due to a patented non-contact recoater, which is used to deliver a fresh layer of powder to be melted and fused with a laser. In powder-based metal 3D printing, when powder is laid on top of another layer, a recoater could dislodge the part if it’s not fixed to a build plate.

In VELO3D’s Sapphire System, the re-coating blade is not in contact with the powder bed. Once the powder is deposited, a scraper blade and vacuum process are applied to the top of the powder to make sure that it is absolutely level.

With a recoater not contacting the previous layer of powder, a part doesn’t need any support anchor it to a metal build plate. In the meantime, simulation and a closed-loop control system powering the printer enable complex internal features to be printed without supports.

To leverage the full power of the Sapphire 3D printer, VELO3D’s team helped KW Micro Power to further improve the design of the generator component. The finished part is 37% lighter than the original design and is said to perform better thanks to reduced stresses. But more importantly, the design which was previously deemed non manufacturable, was made possible thanks to a new generation of metal 3D printing technologies.

Bringing the most complex ideas to life

With so many opportunities unlocked by 3D printing, the technology allows manufacturers to produce innovative products with optimised an customised designs, which would be impossible with traditional manufacturing.

However, to unlock this potential it’s crucial to follow design principles unique to additive manufacturing. Only when armed with understanding about both possibilities and limitations of 3D printing, can companies use the technology  to fulfill their most creative ideas.