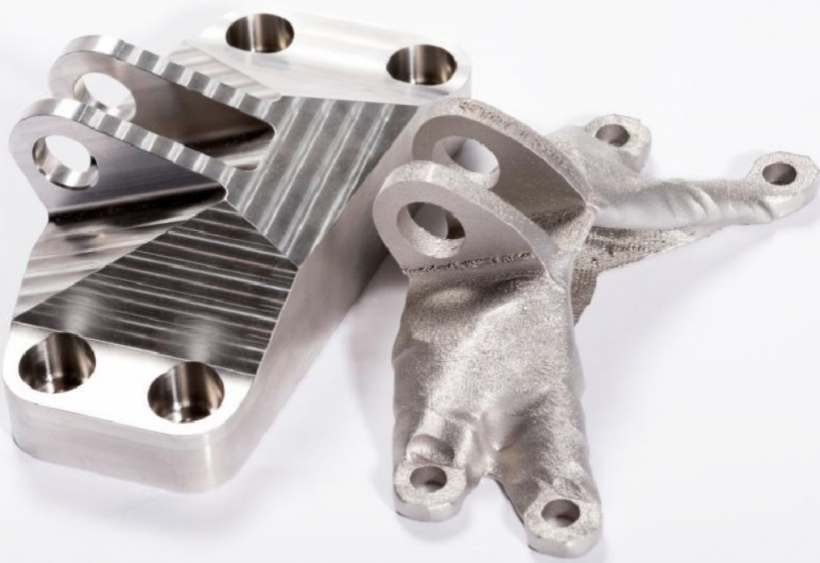 Today, additive manufacturing (AM) offers unprecedented possibilities for the design and production of functional parts. However, to fully exploit the design complexity offered by the technology, design software, like topology optimisation, is needed.

Topology optimisation makes the production of stronger, lightweight parts possible. Today’s article will explore how topology optimisation, coupled with 3D printing, can help engineers to reimagine their approach to designing and producing parts.

What is topology optimisation?

Topology optimisation is a generative design technique that optimises the geometry of an object using mathematical calculations.


The process of optimising part’s shape begins by defining the “design space” that represents the maximum volume a part can occupy. Then the software analyses the shape based on several requirements, such as load, deformation, stiffness constraints and boundary conditions.

This allows the software to identify areas where the material can be removed without sacrificing part’s function or performance.

In this way, topology optimisation helps to create the best possible structure of a given part.

The benefits of topology optimisation

Topology optimisation software helps to speed up the part development and design process by automatically iterating the design until it creates an optimised geometry.

By factoring performance requirements into the design right from the start and automating the design generation process, it’s possible to come up with an innovative design much faster, ultimately speeding up the design cycle.

Perhaps the biggest advantage of using topology optimisation is the ability to enhance part performance by reducing its weight and optimising its strength.

By adding or removing the material in places, defined by a set of parameters, topology optimisation tools allow engineers to explore endless design options and find the best possible a lightweight, yet resilient, structure of a given part.

Lighter parts are sought after by many industries. In aerospace, for example, lightweight components can significantly reduce aircraft fuel consumption, while in motorsports they can radically improve racecar performance.

Additionally, the lighter the part, the less material that has been used to produce it, which brings down manufacturing costs.

Traditional manufacturing approaches are often limited in their ability to produce topologically optimised designs. Such designs often feature complex shapes, that are usually impossible or cost-prohibitive to produce using machining or injection moulding.

3D printing, on the other hand, is capable of producing intricate shapes without the added cost for complexity. This makes 3D printing the best technology to make the most of topologically optimised designs.

The combined use of topology optimisation and 3D printing can be found in industries such as automotive, aerospace and medical.

Aerospace is one of the top adopters of topologically optimised designs, thanks to the benefits of creating lightweight parts, reduced support structures and preserved strength of the parts produced.

Optimised and additively manufactured components prove to be highly valuable in cutting down costs for launching satellites and space vehicles.

A good example is that of aerostructure manufacturer STELIA Aerospace, which has used topology optimisation to produce aeroplane fuselage panels.

Thanks to topology optimisation, designers and engineers from STELIA have been able to create stronger aircraft fuselage panels, with enhanced stability. There is also an added ecological benefit, with the topology-optimised design leading to less material waste.

Another industry to benefit from topology optimisation is medical. Functionally optimised structures open new opportunities for the production of implants that mimic a patient’s bone stiffness and density.


In a recent example of this, IT company, Altair, combined 3D printing and topology optimisation software to create an improved hip stem implant.

By inputting parameters like size, weight and the expected load the implant would bear, topology optimisation software was used to create a new design for a hip implant. The optimised design distributes stress and strain in a more efficient way than a generic implant.

Furthermore, topology optimisation software helped to determine where the material could be replaced with lattice structures to make the implant lighter.

When tested, the optimised implant offered an endurance limit increased to about 10 million cycles. This means that the hip implant could endure jogging from Los Angeles to New York and back – twice.


The roof bracket, a small component that helps to fold and unfold the top of the car, required a new design to maximise the performance of the roof-folding mechanism. To achieve this goal, engineers at BMW combined 3D printing with topology optimisation software.

By using the software, engineers were able to input parameters like the weight, the size of the component and the load it will take. The software then generated a design that optimised the material distribution of the part.

Thanks to Selective Laser Melting (SLM) technology, engineers created a metal roof bracket that is 10 times stiffer and 44 per cent lighter than the conventional alternative.

Altair is a global technology company that provides software and cloud solutions in the areas of product development, high-performance computing and data analytics.

ANSYS is a provider of simulation software and design tools for mechanical engineering. ANSYS provides designers with an automated topology optimisation tool integrated with its full suite of multiphysics software.

Topology optimisation in Ansys Mechanical allows you to take into account multiple static loads combined with optimising for natural frequencies (modal analysis), as well as satisfy requirements for minimum material thickness. In addition to that, the software is designed to easily validate optimisation results, speeding up the design process.

The field of design and CAD software also contains a handful of startups hoping to transform the market. ParaMatters, founded in 2016, has developed generative design software, CogniCAD.

It provides a variety of loading conditions, design goals and constraints that help to ensure the design is suitable for 3D printing.

In terms of topology optimisation tool, nTop Platform allows users to apply multiple loading conditions and optimise for a variety of performance criteria including stress, displacement and stiffness.

Once the design has been optimised, the tool enables automated conversion of topology optimisation results in editable geometry. According to the company, this can save you time and effort by providing a fast and repeatable process without the need for manual geometry reconstruction.

Topology optimisation software for AM has seen remarkable progress over the last few years. Both large software companies and startups are developing advanced solutions to push the boundaries of design for 3D printing.

Thanks to these advancements, companies within a range of industries are now able to take advantage of greater design freedom, faster design cycles and enhanced part performance.

Moving into the future, the capabilities of topology optimisation software for AM will continue to evolve, unlocking new, powerful possibilities.