The Evolution of HP’s 3D Printing Technology: From Polymer to Metal AM 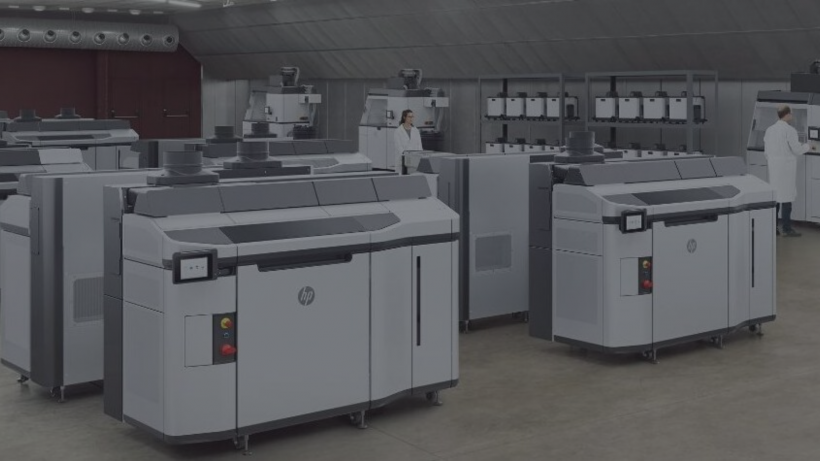 HP is moving full speed ahead with its 3D printing strategy. Since its first foray into Additive Manufacturing (AM) in 2016, the company has launched multiple polymer 3D printing systems and, more recently, introduced Metal Jet technology.

To keep up with the advancements in HP 3D printing, below we explore the evolution of its technology and what it means for the future of the 3D printing industry.

Dipping its toe in 3D printing

3D printing has a lot of barriers to entry, from economical, technological and workforce standpoints.

For example, many industrial 3D printers still lag behind traditional equipment in terms of speed and efficiency. Then there is also a steep learning curve for mastering AM. But the greatest barrier to adoption perhaps lies in substantial investment needed to put AM on the production floor.

This journey led to the launch of Multi Jet Fusion in 2016.

HP Multi Jet Fusion (MJF) is a Powder Bed Fusion (PBF) technology, which means it uses plastic powder to create parts. The MJF process starts by spreading a thin layer of powder across the printer’s bed.

A fusing agent, engineered to absorb infrared energy, is jetted across the bed tracing the contours of the part.

This step is followed by applying the infrared light which heats the areas with the fusing agent, melting and fusing powder in those areas. Layer by layer, the process is repeated, slowly building up the part.

When comparing the cost of the MJF and SLS parts, Xometry, an online manufacturing marketplace, found that producing a part using MJF costs 30 per cent less to print than its SLS counterpart. And this difference increases as the volume of the parts grows, due to the HP MJF printer’s ability to print several parts simultaneously.

On its way towards industrialised polymer 3D printing

Revolutionary in many ways, HP’s MJF technology was geared towards functional prototyping and volume production from the outset.

The company’s first Jet Fusion (JF) 3D 4200 system, launched at the end of 2016, has earned a reputation as one of the best low-volume production machines in its class of PBF systems.

Consisting of the printer, the cooling station and two build units, the JF 4200 system is aimed at streamlining the printing and post-processing steps as much as possible.


The interchangeable build units are particularly useful, as they allow for a continuous printing process, by being able to be moved from the printer directly to the post-processing station for cooling and cleaning as soon as printing has finished.

Thanks to its focus on production and quality, the system was well received in the market. For example, the Digital Manufacturing Trends Q2/2018 report by 3D Hubs, the global manufacturing-as-a-service platform, ranked the HP Jet Fusion 3D 4200 number 2, according to its Printer Quality Rating, and the machine took first place in terms of the number of parts produced that year.

In terms of applications, the capabilities of the JF 4200 system are wide-ranging. It can be used for anything, from functional prototypes to tools, to short-run production of end-use parts.

A notable example of what’s possible with the JF 4200 system is an announcement last year of HP partnering with SmileDirectClub, a manufacturer of transparent teeth straightening devices, called clear aligners.

Through this partnership, SmileDirectClub has installed 49 HP Jet Fusion 3D printing systems to produce over 50,000 unique moulds a day. These moulds are then used to cast clear aligners.

With its technology, HP 3D Printing has helped SmileDirectClub accelerate their growth and meet the increasing customer demand.

Accurate, affordable colour 3D printing is the end goal for many manufacturers, many of whom spend countless hours dyeing their 3D prints after they’ve left the print bed. A better solution – but one that has been costly and exclusive to a select range of AM systems – is simply 3D printing objects in full colour.

The new series, developed by HP, complements its existing range of industrial 3D printers that currently print only in grey and offers an affordable option for small or medium-size product developers.

By bringing full-colour 3D printing to the table, the new range is also clear competition for existing machines from Stratasys and 3D Systems.

The next level: volume additive manufacturing

In 2018, HP had reportedly achieved a milestone of 10 million parts produced with its technology. But the company didn’t want to stop just on that. HP wanted to go further and unlock the new level of volume manufacturing in 3D printing.

The use of 3D printing in series production has been one of the key trends shaping the industry over the last few years. As companies find more applications for the technology in production, they demand solutions that can support increasing production volumes.

While many players on the market have been developing solutions geared towards increased throughput, arguably none has been as fast-paced as HP.

2019 marked another momentous year for HP, as it launched the new production-focused 5200 series of its MJF 3D printers.

While the 500/300 series of 3D printers target functional prototyping, and the 4200 series is aimed at small volume production, the newest series has signalled a new chapter in the history of 3D printing at HP – volume manufacturing, with accuracy and repeatability, likened to injection moulding.

Among the most notable features of the 5200 Series is the upgraded power of lamps inside 5200 3D printers. This enables the new system to fuse powder in a single pass, as opposed to a two-pass mode in the previous systems. As a result, the system has 40 per cent improvement in productivity and opens up possibilities for 3D printing of high-temperature materials.

Several companies are already using HP’s Jet Fusion 5200 systems for production applications. One example is wind turbine manufacturer, Vestas, which is using the technology and TPU material to produce protection components for its windmill blades.

Furthermore, Canadian helmet manufacturer, Kupol, is also working with the system to 3D print safer, more comfortable helmets. HP itself is leveraging its technology to produce components for its other printing machines.

While hardware plays a big role in this progress, it would be difficult, if not impossible, to make the most of MJF without the ongoing development of new materials.

When MJF was first introduced in 2016, the technology was limited to one material – Polyamide 12 (PA12), also known as nylon. Gradually, HP has been expanding its material portfolio to include a wider range of thermoplastics.

For example, the 4200 series can print in different types of nylon today, including PA 11 and PA 12 Glass Beads, a 40 per cent glass bead-filled nylon, as well as a flexible and soft TPU material.

While most of these materials are available in the latest 5200 series, one material, polypropylene (PP), has recently been launched specifically for the newest 3D printers.

Developed in partnership with BASF, the PP is a versatile, durable, and chemically resistant thermoplastic, which has the same properties as commonly used PPs in injection moulding, including chemical resistance, low moisture absorption and long-term durability.

Thanks to these properties, PP is particularly suited to customers in the automotive, consumer, industrial and medical sectors.

One thing particularly exciting about HP’s materials is their high reusability.

In polymer PBF, the powder that surrounds the printed part is the same material used to print a part, and it tends to be expensive. Of course, this wouldn’t be a problem if the powder could be 100 per cent reused, which is currently impossible.

One reason is that, in PBF processes, polymers get exposed to high heat for long periods, thus undergoing chemical changes that make their sintering characteristics much less predictable. Currently, the only way to overcome this issue is by mixing ‘used-but-unfused’ powder with virgin powder, in order to be reused.

For example, HP 3D High Reusability PA 122 has been designed to avoid molecular growth while the material is exposed to temperature with time. These materials are known as medium to low reactive materials, and they can be reused up to 80 per cent without degrading the material and, consequently, not affecting part quality.

HP plans to continue expanding the materials palette even further, delivering a wider family of thermoplastics, including those with flame-retardant properties, elastomers, polyamides, commodity plastics and high-performance materials.

Crucial to this progress will be the HP Multi Jet Fusion Open Platform, which invites chemical companies to collaborate on materials development to accelerate materials innovation.

In its relatively short presence on the polymer 3D printing market, HP has established itself as an agile and ambitious disruptor. Now the company is moving toward the next frontier – metal 3D printing.

Introduced in 2018, the next extension of its additive offerings is a Metal Jet 3D printing system, powered by binder jetting technology.

The process begins by spreading a thin layer of powder, with printheads strategically depositing droplets of binder onto the powder bed. The printing plate then lowers and another layer of powder is spread.

However, the unique advantage HP introduced to this technology lies in its innovative printhead and ink technology.

Although binder jetting technology is inherently fast, HP has applied its knowledge of printhead technology to make it even faster. The Metal Jet system is equipped with 6 printheads, with 5,280 nozzles each. Having these multiple rows of nozzles introduces greater productivity and reliability to the printer.

Furthermore, by leveraging its expertise in ink technology, HP has developed an innovative binding agent to make the sintering process faster and cheaper.

‘With metal injection moulding you typically have more than 10 % by weight binder that has to be burned out. In our case, we have less than 1%, which is an order of magnitude is less, making it faster, lower-cost and much simpler to sinter’, says Tim Weber, HP’s Global Head of Metals, speaking in an interview with AMFG.

These advancements, combined, result in a metal 3D printer, which is said to achieve economies and efficiencies comparable to conventional production technologies.

HP is not selling the machine yet, though. Instead, the company has launched a parts production service, looking to make the 3D printer commercially available in 2021.

Considering the claims HP has made about Metal Jet, this technology could become the key to unlocking a sustainable value proposition for metal 3D printing in high-volume production.

One industry that could particularly benefit from this technology is automotive. Volkswagen has been collaborating with HP on its metal 3D printing technology for two years now, looking to integrate Metal Jet printed structural parts, such as gearshift knobs and mirror mounts, into the next generation of its vehicles.

HP may not be the oldest player in the 3D printing industry, but it proves to be the player dead set on becoming the market leader.

The evidence of this is not only HP’s ambitious 3D printing roadmap but also its complete confidence in its technology. This confidence, for example, enables HP to use 3D printing as a part of its supply chain, churning out parts for its 3D printers.

The company has been betting on 3D printing as a digital manufacturing technology since it first tested the waters of this industry. Now HP is increasing its momentum in 3D printing, and it will be exciting to see where it will lead both the company and the industry.