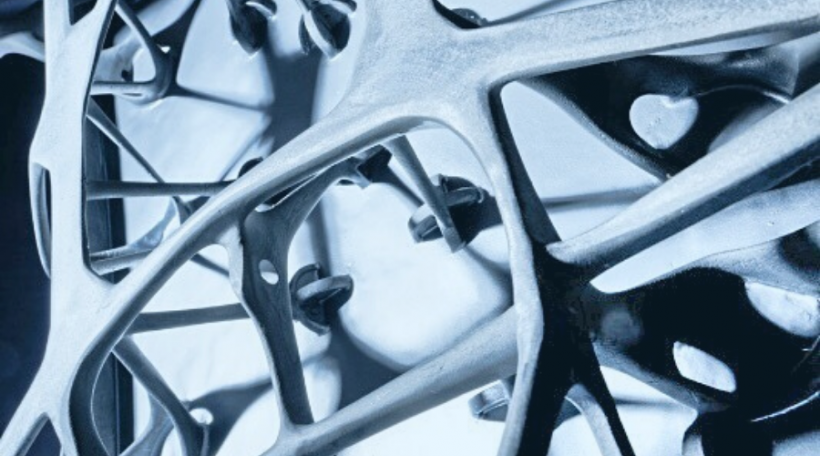 Brackets, although fairly simple parts, are a popular choice for 3D printing. For one, 3D printing enables bracket optimisation, helping to improve the performance of a part as well as a structure in which a bracket is used.

In today’s Application Spotlight, we explore the key benefits of using 3D printing for brackets, as well as dive into some exciting applications in the aerospace and automotive industries.

What is a bracket?

A bracket is a fastener, designed to hold two perpendicular parts together in an assembly and to strengthen the angle.

Brackets hold together structures all around us (think buildings, planes and cars), largely determining the strength, resilience and integrity of those structures.

Why use 3D printing for brackets?

This is largely possible, thanks to the ability of 3D printing to create complex geometric forms that would be either impossible or cost and time-prohibitive with traditional manufacturing means.

The key benefits of 3D-printed brackets are:

The production of complex metal brackets will typically require multiple machine setups and can take many hours to complete. 3D printing, on the other hand, may offer a faster solution. One reason is that that it’s possible to nest multiple parts inside a 3D printer, enabling the production of multiple brackets simultaneously in the same machine.

For a bracket that was previously injection moulded, the time saving is even greater because 3D printing eliminates the lead time of producing a mould tooling.

In one example, Philips used 3D printing to produce a redesigned bracket that holds lamps in place at the production line. The part broke down frequently, with one or two failing every week, largely due to repeated exposure to high temperatures, paired with a structure featuring weld lines from a four-piece bracket.

Philips was able to redesign a metal part as a single-structure bracket, reducing time-consuming part assembly and removing weld line pressure points completely. During its first three months of use, the re-imagined bracket has not broken once.

The process of 3D printing a bracket as one component often uses less material, thus creating a lighter bracket.

That weight saving translates into reduced material usage and, in some cases, can improve the performance of a system where a bracket is used.

Take GE’s GEnx engines as an example. The engines used brackets made with traditional methods such as milling. It means that the parts were milled out of a big block of metal, with more than half of it ending up as waste.

The team working on the brackets realised that by 3D printing the part, they would be able to reduce as much as 90 per cent of the waste.


The team also implemented small design improvements that reduced the bracket’s weight by 10 per cent. According to the team, ‘when it comes to flying, every ounce counts’. It means that reducing the component’s weight can have an impact on the plane’s fuel consumption rate, reducing it and therefore leading to a more efficient aircraft.

In another example, Ford engineers recently 3D printed a plastic electric parking brake bracket for Ford Mustang Shelby GT500 that is 60 per cent lighter than a previously stamped steel version.

The possibility to replace metal with plastic or composite

For some applications, 3D printing can be used to produce brackets in plastic instead of metal. Plastic brackets may be a better fit for applications such as consumer products with a limited lifespan or products featuring sensitive electronic components where metal brackets won’t work.

One example comes from a manufacturer of communication devices, Boyce Technologies. The company used 3D printing to build plastic parts for the NYC Transit totems. Each of these systems features a green acrylic cap on its top that houses an LED strip for illumination as well as a sensitive antenna instrument.

To prevent the disruption of the antenna signal, there shouldn’t be any metallic material in front of it. It means that the company had to manufacture the brackets for the LED strip and the housing for the antenna in plastic. The Boyce team had only a short period of time for design, engineering and production, making 3D printing a suitable solution.

Using the BigRep Studio system, Boyce was able to prototype curved mounting brackets for the LED lights to illuminate the cap and then move straight into manufacturing these parts on this same platform.

3D printing these brackets allowed them to be made quickly and more cost-effectively than injection moulding or machining, while also meeting the no-metal requirement above the antenna.

3D printed aerospace brackets, made from titanium alloys, are becoming more common in the design of aircraft. One example is a bracket for an access door latch for the Boeing 787, installed by Spirit AeroSystems.


The door latch fitting, that was previously machined, is now 3D printed by Norsk Titanium, using its proprietary Rapid Plasma Deposition (RPD) technology. The name describes the process: a plasma arc allows for controlled deposition of titanium at rapid build rates. The technology is reportedly 50-100 times faster than powder-based systems and uses 25-50 per cent less titanium than forging processes.

The key reason for switching to titanium 3D printing is the opportunity to lower manufacturing cost. Titanium is expensive, and when machining a part from a block of titanium, a lot of this expensive material gets wasted. The second issue is a large amount of machine time and cutting tool expense that goes into machining the metal away, driving up the cost of production.

By 3D printing a bracket, Spirit can reduce these costs substantially, while expediting the time to market for new parts by at least 60 per cent.

In another example in the aerospace industry, Liebherr-Aerospace has begun 3D printing nose landing gear brackets for the Airbus A350 XWB.

These brackets will be the first-ever qualified 3D-printed titanium parts introduced into the Airbus system.


Unlike Spirit AeroSystems, Liebherr was able to redesign a part to achieve a weight reduction of 29 per cent. The use of 3D printing also helped to increase the component’s stiffness by 100 per cent.

In 2019, Liebherr-Aerospace reached a key milestone: the German Federal Aviation Office gave the company the green light to produce components using AM. Liebherr has since been 3D printing titanium serial parts, including brackets.

A roof bracket, optimised and 3D printed by BMW

The roof bracket, a small component that helps to fold and unfold the top of the car, required a new design to maximise the performance of the roof-folding mechanism. To achieve this goal, engineers at BMW combined 3D printing with topology optimisation software.


By using the software, engineers were able to input parameters like the weight, the size of the component and the load it will take. The software then generated a design that optimised the material distribution of the part.

Thanks to Selective Laser Melting (SLM) technology, engineers created a metal roof bracket that is 10 times stiffer and 44 per cent lighter than the conventional alternative.

Bugatti’s vehicles are also featuring a number of 3D-printed brackets. One is a titanium spoiler bracket manufactured in collaboration with Fraunhofer IAPT. This spoiler is said to enhance the aerodynamic design of Bugatti vehicles.


Another partner in the spoiler bracket project was Siemens, which helped to optimise the bracket for production. In the end, the final part showcased a tensile strength of 1,250 MPa, a material density of over 99.7 per cent and a weight reduction of 53 per cent.

3D printing has also been used to reinvent a small motor bracket with integrated water cooling for the Bugatti Chiron supercar. The part serves as an active heat shield, reducing transferred heat from the motor significantly. The innovative component, printed in AlSi10Mg on an SLM280 Twin 3D printer by SLM Solutions, has been installed in all series vehicles since the release of the first Bugatti Chiron.

Brackets are small and rather mundane parts, which were difficult to optimise in the past, when engineers were constrained by traditional manufacturing methods. Today, engineers can design optimised brackets and bring these designs to life with the help of 3D printing.

Thanks to the technology, brackets can be made lighter, yet more rigid and durable. The examples above also demonstrate that by leveraging 3D printing, the component’s lifespan and overall performance can be improved.