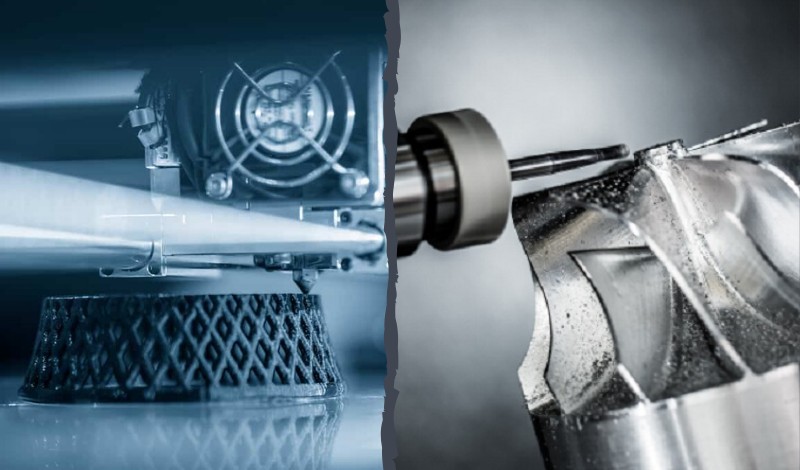 To back up this claim, below we’re exploring 5 key ways of how 3D printing can support traditional manufacturing.

Injection moulding involves the process of melting and injecting plastic material into a special mould tool, shaped as the desired object. When plastic hardens, it takes the shape of the mould cavity. Injection moulding is the best way to mass produce highly accurate and complex products and parts.

However, the process also has some challenges. For example, injection moulded parts are cooled by building channels – essentially, passageways located close to the surface of the mould – throughout moulds. Those channels are typically straight lines, which can sometimes result in uneven cooling, increasing the risk of part deformation.

Efficient cooling can be achieved with conformal cooling channels, which conform to the shape of the part. However, these types of channels are difficult to produce using conventional methods, making 3D printing an appealing alternative for creating injection moulds.

Creating moulds with conformal cooling channels not only helps to increase the quality of the moulded parts, but also helps to reduce the cooling time significantly.

A case in point is Alfred Kärcher GmbH & Co. KG, a company that sells millions of its K2 high-pressure washers worldwide, every year. When trying to meet such a demand, the company faced a bottleneck in production, whereby they needed to increase the production of the washer casings.

Instead of purchasing more injection moulding machines, Kärcher began to look for ways to increase the productivity of the existing machines. The company found the solution in metal 3D printing.

Kärcher turned to LBC Engineering, part of Renishaw GmbH, which discovered that the moulding cycle time was affected by the inefficiency of the cooling process. The casing moulds featured traditional cooling systems, drilled in straight lines, creating hot spots that were adding to the cycle time.

3D-printed conformal cooling channels helped to reduce the wall temperature in the moulds from 100°C to 70°C, shortening the cooling time from 22 to 10 seconds, a reduction of 55 per cent.

Together with some adjustments to peripheral components, such as the material feed and handling system, the cycle time for casings has dropped from 52 to 37 seconds. 3D printing provided the lion’s share of this reduction, enabling Kärcher to increase the productivity of its line and achieve the casing production goals.

‘Creating conformal cooling channels that follow the shape of the cavity and core promotes temperature uniformity in the plastic materials being moulded, and moulders that use this technology are seeing striking results: shortened cycle times, improved plastic part quality, and – above all – cost reductions’, he said in an interview with canplastics.com.

As the technology becomes cheaper and easier to adopt, moulds with 3D-printed conformal cooling channels could ultimately become a new standard in the industry.

Investment casting uses expendable wax patterns and ceramic shells to create complex and detailed part designs. Traditionally, these patterns are injection moulded. However, the cost of injection moulds can reach several thousand dollars, with lead times ranging from one to four weeks. This makes the process prohibitive for people that might not have as much capital or have short deadlines to deliver parts.

For this reason, companies can choose to 3D print patterns in a material suited for investment casting. Many 3D printer manufacturers have developed 3D printable materials specifically for casting, including wax, castable resins, and some thermoplastics, based on PLA and ABS.

Another advantage of this approach is the relatively low risk involved in trying it. Patterns can be 3D printed using professional desktop 3D printers, which cost less than $5,000, a fraction of the cost of more expensive industrial 3D printing equipment.

3D-printed investment casting patterns are increasingly used to create customised jewellery with intricate designs and shorter lead times. In one example, Canadian jewellery company, Vowsmith – which specialises in customised rings – was able to cut its production and delivery times by 50% by integrating 3D Systems’ wax 3D printers into its workflow. In a single print, the company produced between 35 and 40 personalised ring patterns, ready for casting.

The ability to make final cast parts without tooling a mould has given Invest Cast’s customers the freedom to test multiple iterations quickly and cost-effectively, ultimately enabling them to arrive at better final parts.

According to Invest Cast, 3D Systems’ ProJet MJP 2500 IC 3D printer has cut significant time from the investment casting process. The technology allows the company to go from model to metal in 2-5 days, which is down from the average lead time of approximately 6-12 weeks with investment casting moulds.

3D printing can be used to create cutting tools – small inserts made of carbide that remove material from the programmed toolpath.

Some high-performance materials, such as ultra-high-strength steels, titanium and nickel alloys, can be difficult to machine, and could cause the tool to wear out quickly.

3D printing tools with custom geometries, featuring in-built cooling channels that can effectively remove excess heat generated near the cutting zone during machining, can increase the tool life and performance.

Using aluminium alloy and laser-based technology from British specialist, Renishaw, Komet was able to introduce more cutting edges to the tool and optimise its geometry to increase tool productivity.

For example, engineers optimised the tool’s coolant channels to ensure that each cutting edge is precisely supplied with coolant through a separate channel. Thanks to these design improvements, the machining time per unit can be reduced by up to 50 per cent.

AM also offers the potential to reduce component weight, since the material can be used only where it is necessary for the optimum functionality in the component. It’s also reported to outperform conventional production methods, in terms of the delivery time, for any special or experimental tools needed by Komet’s customers.

Furthermore, Swedish tooling systems manufacturer, Sandvik Coromant, has recently introduced a new milling cutter with a metal 3D-printed head. A first for the company, the component marks a move toward the company’s involvement in 3D printing for end-use production.

The new Lightweight CoroMill 390, produced by Sandvik Coromant, is a metal milling head based on the CoroMill 390 design. The tool, produced using Sandvik’s trademark titanium alloy Osprey powder, has been specifically developed to overcome vibration issues during metal milling with long overhangs.

Such features are a common requirement of components used in the aerospace and oil and gas industries. Deep cavities in a CNC-machined part can be compromised by vibration, leading to slower production, shorter tool life and poor surface finish. When used in combination with the company’s Silent Tools milling adaptors, the company reports that the 3D-printed tool can increase machining productivity by 50 per cent.

3D printing can not only be used to create new tools and moulds, but also to repair damaged tooling. Companies in aerospace, shipbuilding and industrial goods, are beginning to use AM processes, such as Direct Energy Deposition (DED), to remanufacture components back to their original form.

Also known as laser cladding, DED uses a laser to generate a weld pool on the component surface. Material is then added to the melt pool as a powder or wire. The melted particles fuse and solidify, while the nozzle is manipulated to add the desired structure to the component.

Earlier this year, a consortium of 7 UK companies and organisations launched a £1.2 million project, called DigiTool, to enable low-cost repair of tools and dies by using AM technologies.

With 3D printing, companies in the tool and die sector can overcome the costs of die replacement and repairs, with the potential to speed up the maintenance process. This will help firms save on costs and materials, while simultaneously improving their sustainability with less wastage.

Faster repair of a mould insert

German tool and mould-making company, HWF, has used 3D printing to repair a mould insert. One of the challenges that HWF faced has been that of building up a structure, measuring 300 x 20 x 20 mm, on a typical mould material.

In the past, structures like this were built up using a manual wire-fed laser cladding method to avoid the risks of cracks, deformation and altered metallurgical properties. However, it can take the welder between 60 and 80 hours to complete the task.

Today, HWF uses DED technology from OR Laser, which enables it to create the same structure by applying layers 250 µm thick, at a rate of 5000 mm³ per hour. The production time, therefore, can be reduced to 24 hours.

Thanks to this process, the base material is also affected much less than before, thus greatly reducing the risk of cracks and material undercut, often caused by conventional repair methods.

Hybrid manufacturing leverages the most valuable capabilities of both technologies: the geometrical complexity of AM and the high precision of subtractive methods. This means that a part can be additively created and machined in a single operation, accelerating the production process.

Meanwhile, Matsuura and Sodick took a different approach, combining Powder Bed Fusion (PBF) technology and CNC capability in their hybrid manufacturing systems. To keep up with the competition, DMG MORI recently responded with its own PBF and CNC hybrid system.

In addition to a standalone hybrid system, there is also an option of retrofitting an existing CNC machining centre with the Ambit powder-feed laser deposition head from Hybrid Manufacturing Technologies.

Companies can also add a combination of powder- and wire-feed capabilities to a CNC machine, with technology from 3D Hybrid. This enables a conventional subtractive system to be converted into a hybrid manufacturing system with relatively minimal cost and effort.

Although the promise of hybrid manufacturing is captivating, we’ve just begun to learn how this technology can be applied efficiently and viably.

3D printing can become a valuable asset for manufacturers, looking to optimise their traditional manufacturing processes.

The technology can be used to produce higher-performing moulds and complex casting patterns, as well as increase the efficiency of machining tools. Furthermore, hybrid machines can offer companies increased freedom and flexibility in design and manufacturing.

Therefore, instead of viewing additive manufacturing as a competing technology, manufacturers should embrace it as another tool in the toolbox and step forward to the benefits it provides.