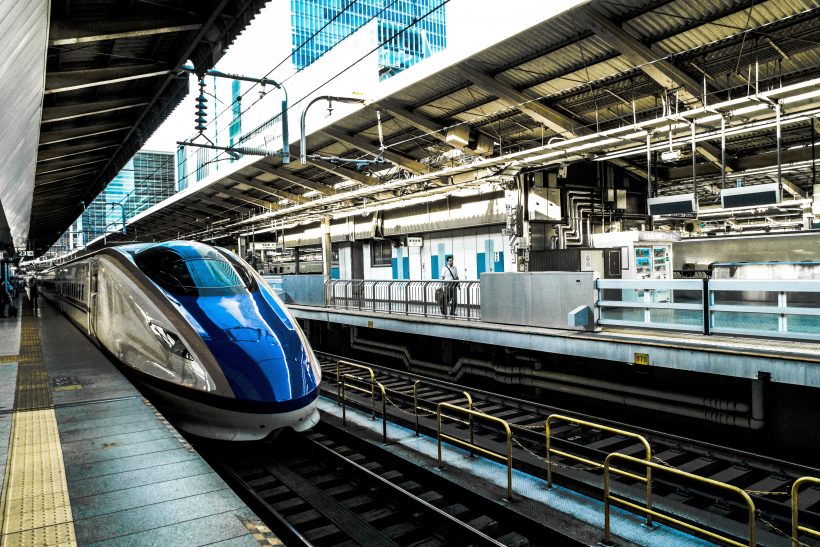 Over the last 12 months, many railway companies, including Deutsche Bahn, Bombardier and Angel Trains, have invested in 3D printing or have been ramping up their 3D printing capabilities.

16 per cent of companies in the logistics and transportation sector are now using 3D printing to manufacture spare parts, according to a recent report by EY.

What is driving this adoption?

In this week’s Application Spotlight, we’ll be looking at the drivers behind the increased adoption of additive manufacturing (AM) in the railway industry, alongside exploring the most exciting use cases.

Building a train is no mean feat, as it requires high-quality components to keep the train on the track, usually for decades.

But what happens when some components break? It can be relatively easy to find replacements for recently manufactured parts, however, when it comes to components created 20 to 30 years ago, the process becomes complicated.

In many cases, railway companies are faced with the situation when the production of the spare parts they need has discontinued or that manufacturers are no longer in business. Given the small number of spare parts needed, designing the part anew and manufacturing it, using traditional methods tailored to high-volume production, often makes no economic sense.

The downtime cost per day for a train is also quite high, driving railway companies to seek new ways of producing obsolete spare parts in a faster and cheaper manner.

3D printing is becoming one of the technologies that can solve such issues. It is a digital manufacturing technology, which means that it relies on digital workflows and doesn’t require additional tools, like moulds, to create a part.

Toolless production, afforded by 3D printing, can significantly cut the manufacturing time for obsolete spare parts, in some cases by as much as 95%. The process is also frequently coupled with reverse engineering, particularly when the original design of a part has been lost.

In this way, railway companies can speed up the train’s maintenance process, getting the trains back in use more efficiently than before.

Early adopters of 3D printing in the railway industry, like Deutsche Bahn, have identified multiple parts that can be 3D-printed as a replacement. Among them are coffee machine parts, coat hooks, steering wheel covers, headrest frames and even Braille signposts for blind travellers. However, the list of parts that can be 3D-printed for the railway industry is continually expanding.

Another driver for the adoption of 3D printing in the railway industry is the ability to produce manufacturing aids like jigs and fixtures, faster and on demand. Although a less publicised use case, 3D-printed tools are typically lighter than traditional counterparts and can be designed ergonomically, providing greater ease of use for workers.

Most 3D-printed spare parts and tooling for the railway industry are manufactured using polymer additive technologies, like Fused Filament Fabrication (FFF) and Selective Laser Sintering (SLS). The technologies are optimised to work with high-performing thermoplastics, like nylon and ULTEM.

To be used for train components, these materials must comply with the industry’s fire safety standards. Several companies are offering flame-retardant thermoplastics. Stratasys, for example, has developed a material compliant to the Rail Standard EN45545-2 for fire safety.

Markforged, a developer of composite 3D printers, has also recently introduced a flame-retardant nylon-based composite material. The material is aimed to widen the range of 3D printing applications in the railway industry, in addition to the aerospace, automotive and defence industries.

While the majority of parts, 3D-printed for the railway industry, are polymer ones, metal 3D printing is also gaining traction. Technologies like Selective Laser Melting (SLM) and Metal Binder Jetting are most frequently adopted to make parts with metals like aluminium, steel and, more recently, titanium.

German railway company, Deutsche Bahn, has been one of the pioneers in adopting 3D printing for spare parts. Over the past few years, Deutsche Bahn has identified the possibilities of using AM for more than 100 use cases. Most parts are availability-relevant, meaning that they can be difficult to procure, causing a month-long vehicle downtime.

One example of such a part, involves a wheelset bearing cover for a Class 294 locomotive. This model was put into service in the 1960s and 1970s, and spare parts for some components, like this cover, are missing.

AM appeared as a natural alternative, as it was able to create this part faster and on demand. The company turned to a service bureau, which 3D-printed a bearing cover using Wire Arc Additive Manufacturing (WAAM) technology. The WAAM process uses wire as a raw material. The wire is fed through a nozzle and welded, layer by layer, into the final workpiece.

In one example, the new maintenance depot has 3D-printed an essential connector tool used in train bogie maintenance (the bogie is the chassis or structure that bears the wheelset axle). It is quite difficult to produce, using conventional methods, because the tool has a complex shape that requires a high degree of customisation.

Furthermore, bogies weigh several tonnes, which means they need to be made with robust and durable materials that can stand up to the significant stresses exerted when the train is moving.

As an alternative, the team at the centre used Stratasys’ FDM technology and an industrial-grade ULTEM 9085. 3D printing allowed Siemens Mobility to leverage the customisation benefits of 3D printing and replace traditional manufacturing methods for this tooling application.

The company also reports that 3D-printed tooling helped them reduce their dependence on outsourcing tools through suppliers and also cut cost per part.

The chosen components are now being trialled on in-service passenger trains. So far, the trial has been positive. For example, the production of the 3D-printed armrest took only a week — a 94% decrease compared to using conventional manufacturing methods

The company is using Stratasys FDM technology, in combination with high-temperature ULTEM 9085 thermoplastic, to 3D-print spare parts on demand. The filament in use is said to be compatible with rail industry standards (the Rail Standard EN45545-2, in particular) and has greater fire resistance and durability than traditional thermoplastics.

In another case, 3D printing helped Angel Trains to produce grab handle replacements. The original spare parts were obsolete, and the supplier had gone out of business. Creating a spare part, using a traditional method, would’ve required the production of a new manufacturing tool, which could incur costs of up to £15,000 and lead times of two and a half months.

However, using FDM 3D printing, enabled the company to produce all seven handles needed for the trains, in just three weeks and for a significantly lower cost.

Excitingly, Angel Trains is also exploring new customisation possibilities with 3D printing. For instance, the company is looking into the opportunity to 3D-print seat back tables with braille, informing the passenger that the toilet is ten rows back from their seat.

If successful, applications like this could significantly improve the servicing of trains and the passenger experience in the future.

CAF, a Spanish manufacturer of railway vehicles, equipment and buses, has also succeeded in using 3D printing for production of spare parts and functional components. Since September 2016, CAF is said to have produced around 2 400 3D-printed parts for use in its rolling stock, including cup holders, radio brackets, window frames, wiper covers and door supports.

The company also uses large-scale 3D printing to produce external parts measuring up to several metres. Among such parts is a front-end component, 3D-printed for an Urbos tram. Presumably, the part was 3D-printed using a Super Discovery FFF 3D printer, developed by Spanish manufacturer, CNC Bárcenas.

CAF names the ability to produce parts, with different dimensions and complex geometries, as a key benefit of 3D printing technologies. The company says it helps them to break the dependency on moulds and original patterns when producing components, reducing the time to market for a new part.

The number of railway companies beginning to explore 3D printing is growing.

For example, Bombardier is set to install a Stratasys 3D printer to accelerate and customise rail part production. The manufacturer plans to use the technology to 3D-print interior and exterior train parts, such as air ducts, housings and cable holders.

Wabtec Corporation, a global manufacturer for the rail and transit industries, has also jumped on the 3D printing bandwagon. This summer, the company invested in GE Additive’s H2 binder jet technology. Wabtec has already identified use cases for as many as 250 components in its product lines, that can be manufactured with AM.

3D printing in the railway industry: A transformative impact

The benefits of using 3D printing in the railway industry are becoming more apparent. Companies in the sector are eager to implement the technology, to tackle issues with obsolete spare parts and long lead times for tooling and end-use components.

However, the examples above show that for most companies the 3D printing journey has only begun. It will take them both time and money to figure out how to use the technology to its fullest potential. But the reward waiting at the end of the journey promises to bring about a transformative, positive impact on the railway’s supply chains and service operations.